Carpio: China does not own South China Sea 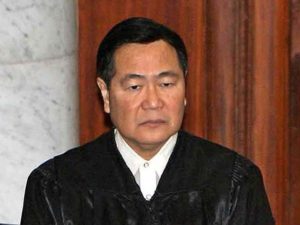 The South China Sea does not belong to China or any state, Acting Chief Justice Antonio Carpio asserted Friday, contrary to the claim of President Rodrigo Duterte.

“China is in physical possession of the entire Paracels, seven geologic features in the Spratlys, and Scarborough Shoal. These geologic features, and their territorial seas, constitute less than eight percent of the total area of the South China Sea,” Carpio, one of the leading figures in the Philippines’ arbitration victory against China, said in his prepared speech for a convention.

“Factually, China is not in possession of the South China Sea,” he added.

His statement comes a day after Mr. Duterte’s remark that China is “already in possession” of the disputed sea route.

“China is already in possession. It’s now in their hands. So why do you have to create frictions, military activity that will prompt a response from China?” Duterte told reporters on the sidelines of the 33rd Asean Summit in Singapore.

In July 2016, the Permanent Court of Arbitration in The Hague, ruling in a maritime case filed by the Philippines, invalidated China’s sweeping claims.

But Duterte has downplayed the victory in favor of economic investments from China.

“Like all other coastal states in the world, the Philippines has exclusive sovereign rights to explore and exploit the natural resources in its EEZ in the West Philippine Sea, which is part of the South China Sea.

If China can possess the South China Sea, then the Philippines cannot exercise its exclusive sovereign rights in the West Philippine Sea,” Carpio said.

The United States and other powerful countries have been sailing both on the high seas and EEZs in the South China Sea to assert freedom of navigation in the hotly-contested waterway.