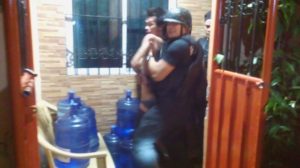 After four hours of negotiation, the hostage-taking incident in Sitio Caduloy Riverside, Barangay Tisa, Cebu City ended peacefully with the arrest of the suspect.

The four hostages – the mother, wife and two sons of hostage taker Elan Sisiban– were rescued unharmed, according to Chief Inspector Kieth Alen Andaya, the head of the Punta Princesa Police Precinct who led the negotiation along with Tisa Barangay Captain Philip Zafra and Superintendent Carlito Apilat, chief of the City Intelligence Branch of the Cebu City Police Office
Sisiban is allegedly a junkie and was high on drugs when he took his mother, wife and young sons hostage by locking himself and his family inside their neighbor’s house while holding a kitchen knife, according to Zafra.

Andaya said they received the report of the hostage-taking incident at around 6:30 p.m. and he immediately coordinated with the barangay’s officials to assist the police in the negotiation for the hostage taker’s surrender.

Apilat, who arrived in the area with a Special Weapons and Tactics (SWAT) team, said their effort to convince Sisiban to surrender fell on deaf ears as the hostage taker was apparently still under the influence of drugs and was demanding food, the presence of a local media personality and for the police to vacate the area.

When it was clear that Sisiban was not going to give up after four hours of negotiation, the SWAT team decided to storm the house by breaking down the door.

Zafra said the police had a chance to get inside the house when he distracted Sisiban by continuously talking to the latter through the closed door.

Sisiban and his hostages were then brought to the hospital to check on their condition.

Zafra said the hostages were shaken but unharmed.

Read Next
ANOTHER USPF SWEEP?