Side roads will be open to traffic as scheduled 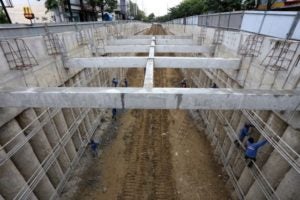 Work on the Mambaling underpass project continues despite an impending storm threat.
Project engineers said the side streets will be open to traffic as scheduled. Inclement weather may set back work on the underpass but the effect will be minimal.
CDN PHOTO/JUNJIE MENDOZA

Opening the side roads of the Mambaling underpass on N. Bacalso Avenue to traffic will proceed as scheduled despite the likelihood that Tropical Depression Samuel may temporarily hamper construction work today, Wednesday.

Project Engineer Roy de la Cruz of the Department of Public Works and Highways in Central Visayas (DPWH-7) told Cebu Daily News in a phone interview yesterday that the contractor has finished the concreting of the side roads last Friday, November 16.

But if the weather today will not permit them to go outdoors, and proceed with Phase 5 of the underpass, its entire completion might suffer a “slight delay,” De la Cruz added.

“As far as the side roads are concerned, we are proceeding this November 24 (Saturday). The storm will not affect its opening but probably the project’s completion. Maybe a slight delay but not entirely significant,” he added.

Tropical Depression Samuel is expected to bring torrential rains in Cebu today, at a rate of 90 mm per hour.

In the meantime, De la Cruz said the contractor of the P638-million project, WT Construction Inc., was still doing the final touches of Phase 4 of its construction, which involved its foundation.

They are scheduled to proceed with Phase 5 any time this week, where work will involve digging the underpass itself.

But with the threat of the tropical depression, De la Cruz said chances are high that Phase 5 maybe pushed back, as he expressed optimism that the weather disturbance would not have any significant impact on the project’s progress.

“The contractor has not formally issued an advisory to temporarily stop the work in the underpass on Tuesday morning,” said De la Cruz.

“We will see this Wednesday, but it is likely there will be no workers to continue the construction since we learned that the incoming weather disturbance will bring in heavy rains,” he added.

The Mambaling underpass is now 81 percent completed and is expected to be operational this March 2019.