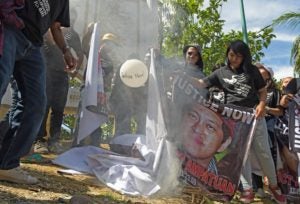 NINE YEARS, STILL NO JUSTICE: Children and relatives of the 32 journalists killed in the 2009 Ampatuan Massacre, burned giant tarps of the Ampatuan clan during a visit at the massacre site in Masalay, Ampatuan town, Maguindanao last Sunday, Nov. 18, 2018, five days before the 9th anniversary.
/Photo by Froilan Gallardo

Ampatuan, Maguindanao – Nearly a decade has passed, but none of those involved in the Philippines’ worst single-day political violence that left 58 dead – 32 of them journalists – has yet been convicted.

A group of families of the victim trekked to the site of the massacre in Masalay, Ampatuan town, Maguindanao where markers bearing the names of the dead are enshrined in a small memorial site last Sunday.

Exasperated by the slow wheels of justice, the families of the victims of the November 23, 2009 massacre, burned here on Sunday afternoon the tarpaulins bearing photographs of three principal suspects to decry the failure of the court to render a ruling nine years later.

Ahead of the 9th anniversary of the Ampatuan massacre on November 23, some 200 family members of the victims and press organizations such as the National Union of Journalists of the Philippines (NUJP), the Philippine Press Institute (PPI) and the Center for Media Freedom and Responsibility (CMFR) gathered today at the massacre site to offer a mass and light candles at the graveyard where the victims were unearthed.

Elliber Cablitas, whose wife Marites was among the massacre victims, decried the slow grind of justice.

“For the ninth year, we are here again to remember them and feel the pain. It’s been too long already but we are still searching for justice because nobody has been convicted,” he told Benarnews.

Elliber’s wife, Marites, who worked at the General Santos-based News Focus and radio station DXDX, was among the 32 media workers who joined the convoy led by the wife of then Vice Mayor Esmael “Toto” Mangudadatu, en route to the provincial office of the Commission on Elections in the next town, Shariff Aguak , to file Mangudadatu’s certificate of candidacy for governor of Maguindanao province. Ampatuan, Jr., was set to file his COC for governor.

The convoy was flagged down along the highway in Barangay Kauran, Ampatuan, Maguindanao by some 100 armed men allegedly led by then Datu Unsay mayor Ampatuan.

At gunpoint, they were ordered to turn left towards Sitio Salman in Barangay Masalay where they were massacred, their bodies dumped in three mass gravesites. “Every time I set foot on this place, I can feel the anger inside me. My mother did not deserve to die the way she did,” Ayeesha Vanessa Dilangalen said.

Dilangalen’s mother was Bai Eden Mangudadatu, the elder sister of Governor Ismael Mangudadatu who accompanied his wife, Genalyn, to Shariff Aguak that fateful day. “We felt there is no closure for the victims and the pain grows every year,” she said.

The visit made five days ahead of the ninth year anniversary was also too painful for many children many of whom were still young when they lost their parents. Jinx Cyrus Maravilla, 14, was only three-years old when her father, Ernesto “Bart” Maravilla of Bombo Radyo in Koronadal City, was killed along with the 32 journalists who joined the convoy. Maravilla said she had faint memories of what her father looks like.

She said old photographs of her father, which she carefully keep hidden, is her only connection to a father she barely knew.

“My only treasured memory of my father is before he left, he gave me a cone of ice cream. Then he was gone,” the young Maravilla said.

Princess Anne Caniban, 14, was so enraged that she joined other children kicked the big tarps depicting the Ampatuan clan that were on display at the covered court where the ceremonies were held.

“Convict the Ampatuans!” She cried as she kicked the tarp of Datu Unsay Ampatuan.

Princess Anne is the daughter of John Caniban of Periodico Ini newspaper in General Santos City.

She later lit a candle on the marker of father and released a white balloon.

Nonoy Espina, a journalist and a NUJP member said even he is angry after coming back to the massacre site nine years later.

Espina, a Bacolod-based journalist , was among the first journalists who arrived at the massacre site nine years ago.

“I am also angry that our justice system is so slow that the court have yet to decide on the case nine years (after),” Espina said.

He said he felt cold the moment he stepped down from the van when they arrived last Sunday.

“I can still remember the bodies on the ground here. So much death was here at that time,” he said.