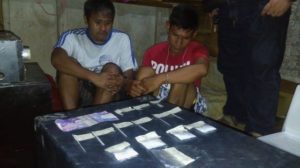 Nathaniel Abella, 31, was arrested inside his house together with a drug buyer identified as Kim Cabellon, 24.

Police confiscated P259,000 worth of shabu from Abella’s residence.

Pomarejos said that they placed Abella under surveillance for at least a week before they implemented the buy bust operation against him at around 2 p.m. on Thursday.

He said they were informed of Abella’s illegal drug business by street peddlers whom they arrested earlier and who would source their supply from the suspect.

Police arrested Abella and Cabellon, a construction worker, during the operation but Adorable managed to escape.

Both Cabellon and Adobrable, who are also Labangon residents, were at Abella’s residence during the police operation, to also buy shabu, Pomarejos said.

Abella and Cabellon are now detained while police prepare a complaint for the violation of the Dangerous Drugs Law of 2002 against them.