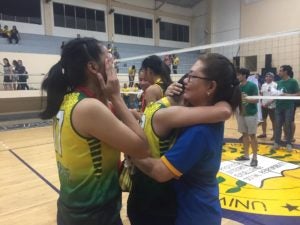 The legendary volleyball coach steered her Lady Warriors to the title via a 2-0 sweep of the Lady Jaguars in the best-of-three championship series.

It was supposed to be a sweet victory for Antigua, who was just in her first year as head coach of the USC women’s volleyball squad.

But the experienced mentor couldn’t help but feel a bit down for USJ-R, the team she used to coach for a long time.

“I have mixed feelings [about the victory], but more on happiness,” said Antigua shortly after her Lady Warriors completed the sweep via a dominating 25-13, 19-25, 25-11, 25-14 victory over the Norvie Labuga-mentored USJ-R team on Saturday evening.

Antigua couldn’t really celebrate fully after the win, esepcially after seeing some of her former players in tears. She said it wasn’t easy seeing them like that.

“I feel for them because I am still attached to these players of USJ-R. My heart cannot be easily taken away from them because almost all of them have been under my coaching. They will always be in my heart,” said Antigua. “I’m like a second mother to them. But I had to do my part as USC’s new coach.” 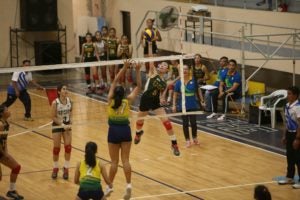 And just like what a mother would do for her daughters in need, Antigua made sure she didn’t leave her former players during that trying time. She hugged some of them on the court and gave words of comfort to others.

“I told them it’s only a game. Life goes on,” she said. “And I told those who are not graduating to continue doing good with their studies so they can maintain their scholarships.”

Antigua said this has how she has been treating her players ever since she started coaching. “When I coach, I don’t coach them just in volleyball. I also coach them in life. I always tell [my players] that life isn’t all about volleyball. And that’s what I told some of my former players.”

This is also the same advice she is giving her players with USC now, especially to those who may be playing their final years with the team such as Rhea Fuentes, Christa Gonzales, Cris Jezza Estose, Cebu City Mayor’s Cup MVP Julia Garcia, and Cesafi women’s volleyball MVP Rosemarie Malagar.

“I will always be right here [even after volleyball],” Antigua said.