Toledo plant to begin supplying 340MW to Visayas grid in ’19 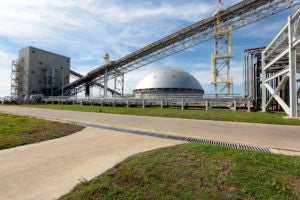 The Therma Visayas Inc. in Toledo City is shown in this June 2017 photo when it was 90 percent completed. The Aboitiz power plant will start commercial operations early next year.
CONTRIBUTED FILE PHOTO

Despite some delays, AboitizPower’s new thermal power plant in Toledo City, Cebu is already expected to start commercial operations by early next year.

According to AboitizPower Executive Vice President and Chief Operating Officer for Distribution Business Group Jose Jaime Aboitiz, they would continue to pursue power generation projects in Cebu and the rest of the country.

“We continue to expand our generation portfolio and here in Cebu, Therma Visayas, Inc. (TVI) will soon switch on the 340-MW baseload facility in Toledo,” Aboitiz said in a speech which was read by Visayan Electric Company (VECO) Chief Operating Officer Anton Mari Perdices during the Aboitiz Visayas Media Party last Friday.

The P41-billion project began construction in April 2015 and was finished this year.

The project was earlier expected to go online within the first half of 2018 but was pushed back to the first quarter of 2019.

According to AboitizPower, to which the TVI is a subsidiary, the TVEP is currently already undergoing testing and commissioning.

Once it starts commercial operations next year, the TVEP will fulfill its contractual obligations including supplying to their customers which include distribution utilities and electric cooperatives.

Aside from the TVEP, AboitizPower is also working on re-establishing the Naga Power Plant Complex (NPPC) which was only turned over to them this year.

“We are also about to start the rehabilitation of the old Naga Power Plant Complex under our subsidiary Therma Power Visayas Inc., and bring it back into service as soon as possible to supply much needed peak demand capacity to the Visayas grid,” Aboitiz said in his speech.

Following years of legal battle as to who won the bidding for the NPPC, AboitizPower took possession of the property last July.

The 153.1-MW facility, which is located in Barangay Colon, Naga City, is composed of diesel and coal-fired power plants.

AboitizPower is yet to disclose their final plans for the property as they are assessing whether to rehabilitate the complex or just build a new and different facility in the area altogether.

Apart from their energy projects in Cebu, Aboitiz also announced that they are currently completing the 19-MW La Trinidad hydropower plan in Benguet and the 68.8-MW hydropower facility in Bukidnon.

The Aboitiz Group also marked its entry into the rooftop solar space with their new business unit, AboitizPower Distributed Energy or APX this year. This is part of the group’s expansion of their renewable energy portfolio.

APX recently signed a Memorandum of Agreement with AboitizLand for a 1.5-MW peak rooftop solar project in The Outlets in Lipa.

They also inaugurated their 420-MW Pagbilao Unit 3 which is expected to help stabilize the energy supply in Luzon.

“VECO is likewise leveraging the robust economic growth in its franchise areas by ensuring power is delivered to our customers reliably, sustainably, at the most cost-effective way,” he said in his speech.