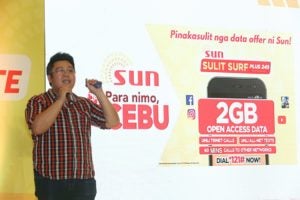 SUN Cellular plans to retain its 59 percent market share in Cebu by offering wider and better internet connection in Cebu.

“Cebu has long been known as a ‘Sun Country’ and we hope to keep this moniker more so now that we’ve boosted our LTE coverage across the island,” said Andrew Santos, PLDT and Smart first vice president and consumer marketing head.

A claim that Brian O’hara, senior manager for Sun Prepaid, agreed with.

O’hara said that Sun’s LTE network had been recognized as among the fastest in the country and had offered as much as six times faster mobile internet speed versus 3G.

As of October, more than 80 percent of the Sun cell sites across Cebu have LTE service.

In addition to network upgrades in Metro Cebu, LTE is also available in the rest of Cebu province, including key tourism areas like Bogo City, Carmen, Daanbantayan, Medellin, Moalboal, Oslob, and Toledo City.

In addition, Sun Cellular has expanded LTE capacity in Minglanilla and the cities of Lapu-Lapu and Mandaue and Talisay.

The LTE service has also been rolled out in Badian, Balamban, Barili, Catmon, Madridejos, Sibonga, and Tabuelan.

O’hara disclosed that the company will also be putting up a cell site in the mountain barangays of Cebu City.

“We will be the first to put up our cell site because we already got the approval,” O’hara said in an interview.

During the press conference, he noted that they have captured a major share in the Cebu market and they intend to continue to remain the number one mobile phone service provider by offering various promotions dedicated only for Cebu.

Also, another new offer is the Sulit Surf Plus 249, which comes with 2 GB data, unlimited text to all networks, and unlimited calls to Sun, Smart, and TNT valid for 30 days.

Read Next
Stop, look and listen the swanky Beeps are here