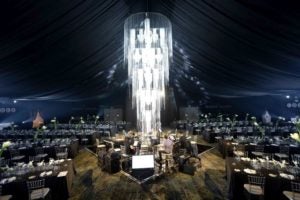 The Silver Anniversary started with Welcome Cocktails at the Ocean Pavilion where guests, dressed to the nines, were treated to a specialty Champagne Bar inside the pavilion, and a Beer Bar at the garden, while being serenaded with popular songs from the 90s.

What’s a grand celebration without a grand fireworks display?

An impressive fireworks showcase lit up the night sky as Mariah Carey’s Dreamlover, which was the #1 song on the Billboard Top 100 on the week of the resort’s opening last October 23, 1993, played in the background.

Drawing oohs and aahs from the crowd and glasses clinking every now and then, the display left everyone amazed, and I, engulfed in waves of nostalgia as I reminisced my fondest memories of this 5-star resort.

It was in July 1994 when the family had first set foot on the resort.

No Ocean Wing, Aquaplay, and Buko Bar, Shangri-La’s Mactan Resort & Spa was barely a year old then, with a wide extent of a well-manicured garden, and an unobstructed view of the Hilutungan Channel. 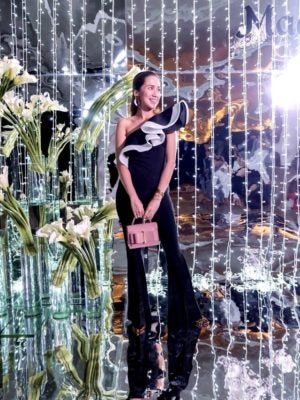 We sauntered across the garden, and along the beach, and I had secretly hoped that we go back the following summer.

And go back we did, not just the following summer but every summer after that.

This was where my brothers learned how to swim, where we snorkelled and got photobombed by a fish, where we had our first doses of water adventures from kayaks, to stand-up paddles, to jet skis, to parasailing.

I spent idyllic summer staycations here as a child and just like the fireworks display, I was left in wonderment and yearning to see and experience more all at the same time, each and every time.

Snapping me back to reality was finale, and the call to make our way to the pavilion’s entrance where exclusive black coasters decked in their 25th year branding await to shuttle the guests from the Ocean Pavilion to the Marquee for the dinner festivities.

Nothing was as captivating as the massive chandelier nestled at the center of Marquee and perched on top of the Cebu Philharmonic Orchestra who serenaded the guests with popular music from 1993 to 2018.

Guests were treated to a 4-course dinner that started with Kinilaw, marinated mackerel, coconut and mango jelly, calamansi crumble, garden salad; Lobster and Pumpkin Bisque which is organic brunoise with crustacean foam; a refreshing Dalandan Refresher; Flame Grilled Beef Tenderloin, mouthwatering dish of rump croquette, tartufata mash cone, glazed asparagus, vegetable ragout, and merlot reduction; culminating the dinner was a specially crafted desert called Planet MAC, a lemon vanilla bavarois sphere on a milky way mousse with Irish jelly and caramel choc crunch–just a quarter of the 25 ingredients used to further celebrate the 25 years even in the food being served. 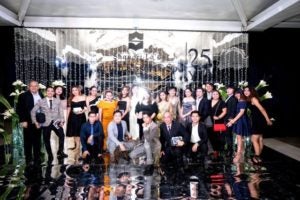 Friends from the media

To make the evening even more exciting, complimentary stays at Shangri-La’s Mactan Resort & Spa’s sister properties in Hong Kong, Taiwan, Singapore and Thailand were raffled off, prompting me (and I bet everyone else in the Marquee too) to pray to the cosmos that our stars align that night.

Who wouldn’t want to jet off to another destination and stay in a world-class hotel with world-class comforts?

The after party, which unveiled a hanging DJ’s Booth with DJ Gio & John Walt, and a Bar with all-you-can-drink cocktails were just the icing on the cake, really.

By: Morexette Marie B. Erram
Showbitz