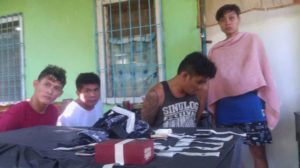 The four alleged cohorts of a slain big-time drug peddler were being presented by the police along with the more than P600,000 worth of illegal drugs seized from them during a buy-bust operation in Barangay Jaclupan, Talisay City, on Tuesday morning.

Operatives seize more than P600K worth of illegal drugs

A suspected high-value target was killed while four others believed to be his cohorts were arrested in a buy-bust operation on Tuesday morning in Sitio Mangga, Barangay Jaclupan, Talisay City.

Confiscated from the suspects were 53.2 grams of suspected shabu with a street value of P627, 760.

Batobalonos said that during the buy-bust operation, Macaraya might have sensed that he was dealing with policemen and decided to shoot it out with the operatives.

Batobalonos said that his men had no choice but to fire back hitting the suspect in different parts of his body.

Macaraya was immediately brought to the hospital but never made it alive.

Manzano, however, said that he is not an accomplice of Macaraya although he admitted that sometimes the latter would ask him to deliver something.

He told CDN that he has no idea what the deliveries were.

Meanwhile, Supt. Janette Rafter, CPPO Public Information Officer, said that they still cannot explain why illegal drugs remain rampant in Talisay but assured that they will never stop until the last drug pusher is put behind bars.

Macaraya, who was believed to obtain his supply of illegal drugs from drug lord Jerome Labitad, was the sixth Talisay City-based drug personality killed this year.

The others included Reynaldo Sencil who was killed in a raid conducted by the Regional Special Operations Group 7; P03 Ryan Quiamco who was killed in a shootout with operatives; Steve Go who was gunned down by a fellow high-risk inmate inside the Mandaue City Jail; Lagtang Barangay Captain Ferdinand Bas whose bullet-riddled body was found inside his rented house in Sibonga town, south Cebu and former PO3 Michael Cortes who died in an ambush while on his way home to Barangay
Biasong, Talisay City.

Read Next
Congressional inquiry sought on delay of HRP approval