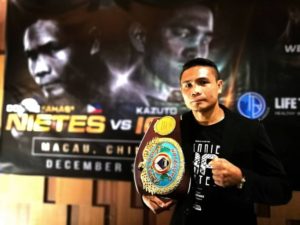 THREE-DIVISION world champion Donnie “Ahas” Nietes certainly feels like he’s in perfect boxing shape at this stage of his career.

“Yes, I’m 36 right? But I feel like I’m 18. No, I feel like I’m 24. I am still in the best shape of my life,” said the longest reigning Filipino boxing world champion who is scheduled to fight two-division world champion Kazuto Ioka for the vacant World Boxing Organisation World Super Flyweight Title on New Year’s Eve in Macau, China.

In a press conference yesterday at the Summit Circle Fuente which was attended by some members of the Japanese media, Nietes said he is in the best shape of his life.

“I never get tired easily. In fact, I just had my 12-round sparring yesterday. And I have more 12-rounders to do for this fight,”said the Filipino boxing legend.

If he wins, Nietes will cement his place as one of the Philippines’ greatest boxers as he will become a four-division world champion.

Against his Japanese foe, Nietes, who holds a record of 41-1-5 (win-loss-draw), believes he has the upperhand when it comes to experience.

“Kazuto Ioka is a young and a very good boxer. He is a tactical boxer which means he is a very dangerous opponent but I am confident that I can win against him not because of my experience. But I also have the right boxing skills to defeat him,” he said.

“I’m not saying that it is going to be an easy fight. It is rather a very difficult fight but it will turn out to be a very great fight.”
Nietes’ 29-year-old foe has a 23-1-0 record.

Part of the reason why Nietes is in tip-top shape is because ALA Boxing Gym hired American Nick Curson to handle Nietes’ conditioning.

“For me, it’s not about the age but the training that you do every day. I never rest. I always stay active and discipline myself strictly. I don’t have a vice and I always dedicate myself to always be fit,” said Nietes.

According to his trainer Edmund Villamor, nobody beats Nietes’ dedication and discipline. This is why even at 36 years old, the Murcia, Negros Occidental native is still in his best condition.

“What makes Donnie the best boxer to train is he never complains. In fact, he even trains himself way ahead of the scheduled fight. That is why I am a hundred percent confident that he can win,” said Villamor.

Read Next
A BORN WINNER