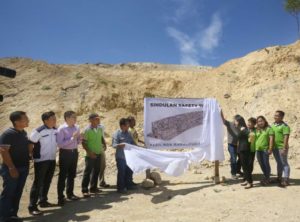 Naga City Mayor Kristine Vanessa Chiong unveils a photo of the soon-to-rise Sindulan Safety Wall, a 180 by 10 meter barrier in Sitio Sindulan, Barangay Tinaan ,Naga City which will be built to protect what’s left of the community from possible danger brought about by landslide debris.

AT LEAST 60 among 444 households that lived within the immediate danger zone surrounding ground zero of the landslide area in Barangay Tinaan, Naga, have yet to receive assistance from the Naga City government after failing to process their claims.

Their current whereabouts could also not be ascertained.

According to Naga City Mayor Kristine Vanessa Chiong these residents, who lived in Sitios Sindulan and Tagaytay, were unable to process their claims for both cash assistance and relocation.

The families were identified based on an assessment report of the Mines and Geosciences Bureau (MGB) Central Office which delineated areas considered part of the danger zone.

Up to P100,000 cash assistance from the local government unit (LGU) and one socialized housing unit in either a 2-hectare property along the coastal side of Barangay Tinaan or at the National Housing Authority (NHA) project in Valencia, Carcar City were allocated for each family.

NHA committed P175 million to build 320 housing units for the Naga City landslide victims; while the city government allotted an initial amount of P25 million for the the construction of 50 housing units beginning next month.

An additional P75 million was also appropriated from the city’s 2019 budget for additional 150 units.

Meanwhile, the over 380 families who managed to process their cash claims were already discharged from the evacuation centers.

Some are staying with relatives while others are renting homes while awaiting their relocation.

“Th MGB already did a reassessment and in the amendment, there are three zones now: Critical zone, danger zone, and regulated zone. Those whose houses are in the regulated zone, might be allowed to go home,” said Chiong adding that an advanced copy of the new classifications sent to her by MGB may however be still subject to change.

“He told me that they presented the harmonized report to NDRRMC and it was approved. I am hoping that the advanced copy that they showed me will be the one that they will endorse to me for implementation,” said Chiong.

Chiong said that as soon as DENR comes out with its official harmonized report, she will start to allow 1,100 families or over 3,900 individuals that remain in evacuation centers to go home.