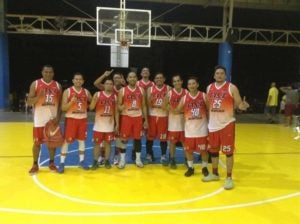 The victorious CTS-C squad strikes a pose after the game. /CONTRIBUTED

THE College of Technological Sciences–Cebu (CTS-C) nabbed its first win of the season after it bested the University of Southern Philippines Foundation (USPF), 103-94, in the 40-47 division of the CAAA Basketball Alumni Association (CBAA) Flashback Season 2 last Sunday at the Ateneo de Cebu gym.

Fiery guard Resty Getubig presided over their breakthrough victory as he fired in a team-high 27 points highlighted by five makes from beyond the three-point arc.

His backcourt mate, Armand Colina, was just as effective as he tallied 22 points to help the team grab its first win in three tries in the second season of this tournament that pits former players of the defunct Cebu Amateur Athletic Association (CAAA), the precursor of the modern-day Cesafi.

Rey dela Victoria tallied 15 markers. Andrew Paquibot scored 29 points for USPF but it was not enough to get the Panthers the win.