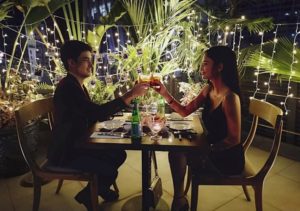 MISS Universe 2015 Pia Wurtzbach’s wish was granted when she and her boyfriend, racing driver Marlon Stockinger were able to have a dinner date for their second anniversary.

Stockinger shared a a photo of him and Wurtzbach sharing a toast.

“We’ve been both busy for a while and she’s been hinting for a dinner date. Wish granted! I hope you enjoyed my little surprise for you. Cheers, here’s to many more years with you! Happy anniversary, love,” he captioned the photo.

Wurtzbach and Stockinger started dating in 2016 but it was in 2017 when Wurtzbach confirmed their relationship.

The two reportedly broke up in August this year and even unfollowed each other on Instagram.

But on September 30, both showed up together at the ABS-CBN Ball at Makati Shangri-La, prompting talks of a reconciliation.

“Ballin’ with my baby,” he captioned the photo.