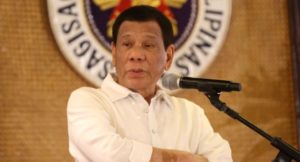 “It’s a killing activity, and I think that at my age — ako hindi masyado, kasi nagmamarijuana ako eh, para magising. Sa iba, hindi na kaya,” Duterte said in a speech during the conferment of awards to the Asean-National Organizing Council officials in Malacañang.

The President was referring to his hectic schedule during the 33rd Asean Summit in Singapore.

“Susmaryosep, walang tulog. And the more that crescendo becomes faster, mas lalo kang ‘di nakakatulog kasi hinahabol ka na babasahin eh, and so you do not want your President to look ignorant. So I have to catch up with the reading, wala na talagang panahon,” he added.

During the Asean summit in Singapore, the President skipped several meetings on the second day of the regional meeting.

Presidential Spokesperson Salvador Panelo explained that the President took “power naps” to catch up on his sleep.

In his previous speeches, Duterte earlier admitted that he used to take fentanyl for the pain caused by his previous injuries.

Duterte, in several press interviews, has said that he was in favor of medical marijuana.

In same speech, Duterte also complained about the food being served during the Asean Summit.