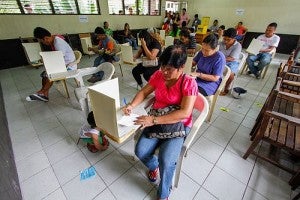 CEBU CITY, Philippines- The Police Regional Office in Central Visayas (PRO-7) has included four cities and three towns in Cebu in its Election Watchlist Areas (Ewas) to ensure the conduct of a clean and honest May 2019 election.

Chief Superintendent Debold Sinas, PRO-7 director, said that the cities of Cebu, Mandaue and Lapu-Lapu were placed under EWAS because of the population density in these highly urbanized areas.

Danao City in northern Cebu and the municipalities of San Fernando and Ronda in the south were placed under the yellow EWAS category because of the possibility of intense political rivalry in these localities in the election.

Tuburan town in midwest Cebu was placed under the orange EWAS category because of the presence of armed groups in the area in the last three elections.

However, no Cebu town or city was placed under the red EWAS category which would indicate the presence of intense political rivalry, armed groups, and history of violence in these areas in the previous elections.

The Philippine National Police, the Armed Forces of the Philippines and Commission on Elections will use the EWAS list in determining if there was a need to deploy augmentation troops in a particular locality during the election.