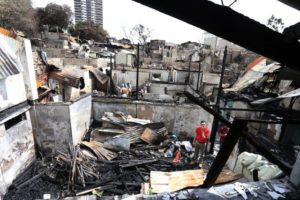 RESIDENTS of Barangay Kamputhaw, Cebu City, displaced by the fire are now appealing to the city government to allow them to reconstruct their houses even if the property is owned by the University of the Philippines Cebu (UP Cebu).

Claudia Atil, 49, told Cebu Daily News that her family of nine cannot yet afford to look for a place where they can transfer.

Atil, whose family is staying at Kamputhaw’s Purok 8 gymnasium, said they would yield to recommendations to reblock the fire site if it meant allowing them to return.

“Mas muuyon mi if i-reblock kaysa sa iparelocate mi (We would prefer reblocking rather than be relocated),” said Atil, who has been living in Purok 3, Barangay Kamputhaw, for more than 20 years.

She said that for now, they need clothes and construction materials so her family can start over.

“Pasalamat sad mi nga naay tabang gaabot. Amo lang gyung hangyo kay makabalik mi (We are thankful for the help we received. But we are really praying that we can rebuild our homes),” said Atil.

This was also the call of Danny (not his real name) whose two-storey shanty was turned into ashes after the fire.

Danny, 35, said his meager income as a company driver is not enough for him and his brother, who is still studying, to find a new place to stay.

Both are now staying inside Purok 8’s gymnasium, too. 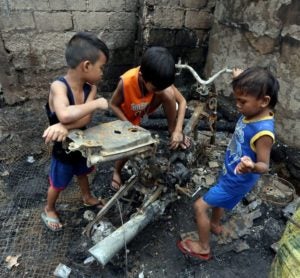 These three boys are trying to pry out the metal from a motorcycle that was burned down a day
earlier, in a fire that hit Purok 3, Barangay Kamputhaw, Cebu City on Dec. 5, 2018 .

As of 6 p.m. last Wednesday, the Department of Social Welfare and Services (DSWS) tallied a total of 194 families or 716 individuals affected by the fire which broke out earlier that day.

Damage was pegged at P1 million.

This is the second fire that struck Barangay Kamputhaw this year and fire authorities are still determining the cause of the fire.

Last August, more than 200 families residing in some portions of Purok 3 lost their homes to a fire.

Most of the houses damaged during Wednesday’s fire were boarding houses, many of the rooms being rented by some students of UP Cebu.

In a post on their official Twitter account, the UP Cebu University Student Council said that the university’s guesthouse was used to accommodate UP students displaced by the fire.

“UP students affected by the fire in Kamputhaw may now evacuate to the UP Guesthouse. Just present your ID or form 5,” the tweet said.

Officials from UP Cebu and the city’s Division of Welfare and the Urban Poor (DWUP) are yet to meet and discuss the fate of the affected families.

Read Next
Seven killed in separate shooting incidents in Cebu