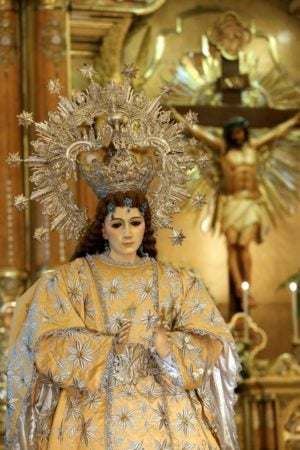 The image of the Blessed Virgin Mary takes center stage as hundreds of Marian devotees attend the Mass for the Feast of Our Lady of the Immaculate Conception officiated by Cebu Archbishop Jose Palma at the Cebu Metropolitan Cathedral on Dec. 8, 2018.

CEBU Archbishop Jose Palma on Saturday dismissed as a “bad joke” the statement of President Rodrigo Duterte that seemingly encouraged the killing of Catholic bishops whom he described as “stupid” and “useless.”

“Magtawa-tawa lang gyud mi kay para namo ang mga tawo nga normal, dili gyud mokagat sa giingon ni Duterte. (We just laughed about it because for us, bishops, normal people would never believe what Duterte said),” said Palma in an interview after offering a Mass for the Feast of the Immaculate Conception at the Cebu Metropolitan Cathedral.

President Duterte on Wednesday, December 5, intensified his verbal attacks against Catholic bishops, as if urging for their killing.

“[I]tong mga obispo ninyo, patayin ninyo. Walang silbi iyang mga gagong iyan. (These bishops, kill them. They are useless and stupid.) All they do is criticize,” Duterte said in his speech during the awarding ceremonies for the 2017 Presidential Award for Child-Friendly Municipalities and Cities (PACFMC) Malacañang.

The prelate said a person in his right mind would not have be encouraging the killing of a group of people.

(Who in their right mind would say he would want a group of bishops killed? Me, I just treat it as a bad joke.)

Palma added that he does not fear for his safety and the safety of the bishops in the Philippines amidst the threats from President Duterte.

“Wala ko nahadlok. We have nothing to be afraid of. What have we done to deserve being killed?” said Palma.

But the Commission on Human Rights (CHR) is treating the President’s words with caution.

On Thursday (December 6), the CHR released a statement saying that it was gravely alarmed by Duterte’s remarks against Catholic bishops, as it noted the continued and rising attacks on government’s critics.

“Statements that could embolden the violence against priests and other religious persons are gravely alarming in the face of continuing attacks against those deemed as critics of the government,” CHR spokeswoman Jacqueline de Guia said in a statement.

The rights body then highlighted the efforts of some Catholic bishops such as Caloocan Bishop Pablo Virgilio David, who has been called out by Duterte in his speeches, in helping the communities and families suffering human rights violations stemming from the government’s drug campaign.

According to De Guia, the Catholic Church plays an important role in the rehabilitation of these grief-stricken families.

Malacañang on Thursday sought to stave off controversy.

“We should be getting used to this President,” Panelo said. “He actually means stop criticizing and do some good for this country. Help us,” he added.

This is not the first time President Duterte criticized the Church.

He reiterated in his earlier criticism that the Catholic Church is “the most hypocritical institution.”