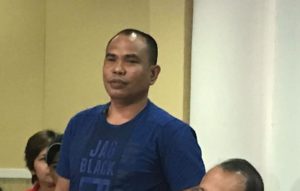 Marcelo Adorco, former driver and associate of Kerwin Espinosa, submitted another affidavit to the Department of Justice on April 30, 2018. (Photo by TETCH TORRES-TUPAS / INQUIRER.net)

In a motion submitted on Monday to Manila RTC Branch 51, DOJ prosecutors said Adorco’s testimony was “absolutely necessary as there is no other direct evidence available for the proper prosecution of the offense committed.”

According to the DOJ, utilizing an accused as a state witness is allowed under the law to encourage “a person who has witnessed a crime or who has knowledge of its commission to come forward and testify in court…by protecting him from reprisals and shielding him from economic dislocation.”

Adorco has taken the witness stand and testified so that the court could determine if he was qualified to be discharged or not.

Once discharged, he will no longer be included as an accused in the case.

The DOJ filed the cases against the five last July 25 after preliminary investigation conducted by a panel chaired by Senior Assistant State Prosecutor Juan Pedro Navera found ample basis in the complaint of PNP Criminal Investigation and Detection Group (CIDG) for violation of section 26 (B) in relation to section 5 or Article II of R.A. 9165.

The investigating panel based its findings on the testimony of Adorco, who confessed participation in the illegal drug trade and pinpointed Espinosa, Co, Impal and Malindangan as his cohorts.

The case was previously dismissed by a DOJ panel of prosecutors for lack of evidence, but because of the outrage over the dismissal of the against Lim and Espinosa that caught the ire of President Rodrigo Duterte, then Justice Secretary Vitaliano Aguirre II ordered a reinvestigation.

Read Next
Nalzaro to bring his libel case to RSP, DOJ’s attention