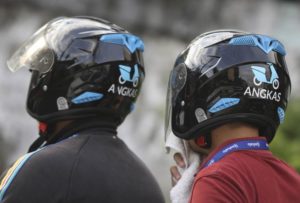 MANILA, Philippines — Motorcycle ride-hailing firm Angkas said on Wednesday that the issuance of the temporary restraining order by the Supreme Court would put the livelihood of its drivers at risk for the holiday season.

The company said it is saddened by the decision of the high court as it would not only affect its riders but its passengers as well.

“This comes at a time when hundreds of thousands of commuters need the Angkas service to beat the worsening holiday traffic,” it said in a statement.

“This TRO also puts the livelihood of 25,000 biker-partners at risk – a few days before Christmas, when their families need it the most,” it added.

Angkas also stood firm that its service is nearly a hundred percent safe for commuters.

It vowed to continue its fight to serve the public “in a safe and efficient manner, as well as legitimizing our riders.”

“We are hopeful that the Supreme Court will eventually rule in favor of the Filipino riding public,” it said.

Meanwhile, the Land Transportation Franchising and Regulatory Board said it is set to release a resolution to implement the decision of the SC.

The Department of Transportation welcomed the decision of the high court.