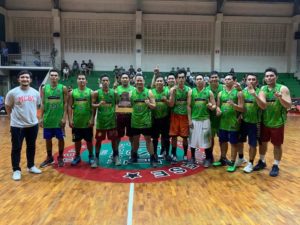 Members of the victorious Gemini Shipping team celebrate their title victory in the MCBL Season 3. With the team in the photo is league founder Jacques Bautista (left most).
contributed photo

GEMINI Shipping outlasted the fancied Brinnovid, 91-82, to come away with the championship of the Metro Cebu Basketball League Season 3 last Sunday at the Capitol Parish Gym.

Gemini was up, 67-60, going to the fourth and the Bantayan-based team kicked the fourth canto off with a 10-2 blast that featured baskets from Samuel Guidayawan, Vandam Chavez, Makij Tayad and team captain, JD Solitario to push the lead up to 77-62, with 7:24 to go.

Brinnovid trimmed the deficit to six, 73-79 after a layup by Jojie Bas but Gemini proved defiant and responded with timely makes from Guidayawan, Chavez and Solitario, whose back-to-back baskets put the game out of reach as it gave Gemini an 88-75 lead with just 1:46 left.

Solitario finished the game with 20 points and 12 rebounds while Guidayawan nearly had a triple-double with 19 points, nine rebounds and eight assists. Chavez added 18 points, six boards, five assists and five steals. Tayad also provided a lift off the bench as he collected 11 points and 13 boards.

Nino Obeso paced Brinnovid with 19 points but Christopher Obeso, the team’s top scorer, was held to just 16 on 6-of-16 shooting.

Season 4 of Cebu’s premier amateur basketball league will kick off on January 26. Interested teams may get in touch with league founder Jacques Bautista at 0917-678-8529.