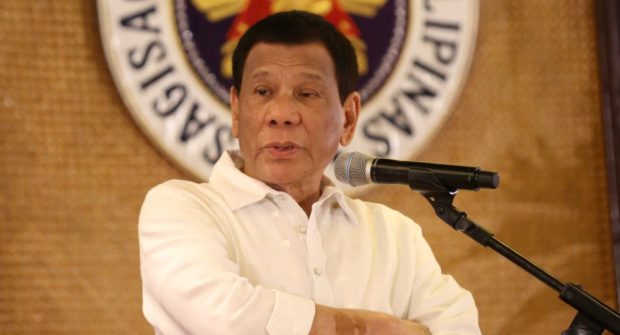 MANILA, Philippines — President Rodrigo Duterte on Saturday ordered the military to “destroy” the New People’s Army (NPA) as he refused to reciprocate the holiday ceasefire declaration of the rebels.

“We do not subscribe to their ceasefire. We are ready for anything. Do not fight them, destroy them,” Duterte said in a speech before soldiers at Camp Manuel Y. Tan in Compostela Valley.

The Communist Party of the Philippines (CPP) has declared a five-day holiday ceasefire but Malacañang said the government would not declare any ceasefire.

“Law and order means you have to destroy — not really fight, but destroy the Communist Party of the Philippines, including its legal fronts and infrastructure,” Duterte said.

The President, in a speech in Davao City on December 19, said the communist rebels do not deserve mercy as he slammed them for being “cruel and brutal.”

He said he no longer considered the NPA as revolutionaries as they are “criminals” and “plain bandits.”

“They are all criminals. Do not consider them revolutionary. They are just plain bandits and that is the way we should treat them,” Duterte said in his speech during the Barangay Summit on Good Governance Region XI in Davao City.

Read Next
Schools urged: Step up info drive on bullying