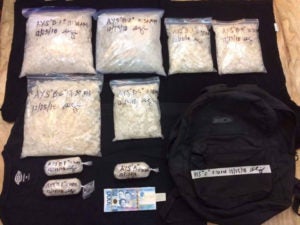 December 25, 2018: An estimated P40.8 million worth of shabu were seized in a buy-bust operation in Sitio Cogon, Barangay Basak Pardo, Cebu City on Christmas day. The suspect identified as Bejie Abesia, 24, is said to be renting a space in the area.
| Benjie Talisic, Nestle Semilla

THE illegal drug operation of a fish supplier, who allegedly used his business to transport suspected shabu from the Pasil fish port in Cebu City to his alleged base of operations in San Fernando town, ended with the death of the businessman in a shootout with police a day after Christmas.

Gomersendo said they also confiscated three packs of suspected shabu with an estimated worth of P2,060,400, two .45 caliber pistols and a .38 caliber revolver inside Sangcap’s house.

He also said that with the death of Sangcap, they hoped to disrupt the alleged drug supply operations of the slain suspect, which involved his fish supply business.

He said that they had monitored the suspect’s alleged operation since three months ago when they received reports about it.

He said that they confirmed reports that Sangcap, who owns a fishing boat, would dock his fishing boat at the Pasil fish market, where fish would be unloaded and loaded on a waiting truck to be transported and sold at San Fernando town.

Gomersendo said that what heightened their suspicion of Sangcap’s operation was when the fish was later found out to have no entrails and that the fish were allegedly sold cheap in San Fernando.

On Wednesday, Gomersendo coordinated with the San Fernando Police to conduct a buy-bust operation against Sangcap.

The buy-bust was conducted at 3:30 p.m. which led to the shootout and the confiscation of illegal drugs from Sangcap.

Gomersendo said that they were still trying to find out the source of the drugs, which they suspected to have come from
Mindanao.