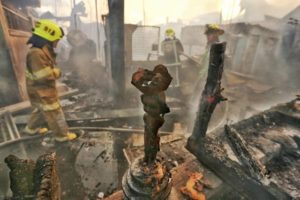 A partly burned image of the Sto. Niño seen at the fire scene in Barangay Duljo Fatima reflects the Cebuano’s devotion to the Child Jesus.
CDN PHOTO/JUNJIE MENDOZA

OF THE 695 families rendered homeless by the fire that hit Barangay Duljo Fatima on Christmas day, only seven families transferred to the designated evacuation center of the Cebu City government.

The city had arranged for two evacuation sites for the fire victims but only one was used, according to village councilman Guian Godofredo.

Godofredo said that they just agreed with their decision.

Godofredo is chairman of the Barangay Social Services and Livelihood as well as head of the barangay disaster management team.

(We can serve everybody and we have ensured that everyone is given assistance.)

Some of them are also staying with relatives within the barangay as well as in the neighboring barangays.

To ensure that everyone gets the food rations, barangay officials go to the different evacuation sites to inform them that food is available.

They expressed their gratitude to all the individuals and groups who gave donations for the fire victims.

For those who want to donate, they can go to the command center directly in order to facilitate the recording and distribution of their donations.

For now, the victims need blankets, mosquito nets, cooking utensils and potable water as the water provided by the barangay is not enough.

Meanwhile, the family of 12-year-old Cyrus John Ferras, who died in the fire, will bury his remains today.

Angelina Ferras, the eldest of the Ferras siblings, told Cebu Daily News that a Mass will be held at the San Nicolas Parish church before the burial at the Calamba cemetery where his body will be laid to rest.

She said the coming New Year celebration would be the most painful celebration for the family after the tragic accident.

The Cebu City Fire Department is still investigating the cause of the fire.