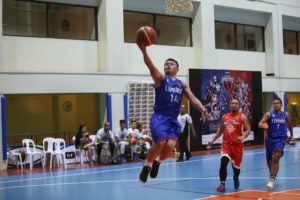 Caption: The Contact Solutions Lemurs registered the biggest upset in the playoffs so far, disposing of the third-seed, Results Manila, to advance to the semis./Contributed photo

The Contact Solutions Flying Lemurs barged into the semifinal round after they took down the third seed Results Manila Spartans in their rubbermatch, 78-55, in the Evo League of the 2018 Tanduay Athletics E-Leagues for Basketball last weekend at the City Sports Club-Cebu.

The win placed Contact Solutions in the best-of-three semis, where it will take on the Kyocera Frontiers.

The Lemurs leaned on a dominant second half showing where they outscored the Spartans, 49-26, to turn a 29-all game at halftime into a one-sided rout. Jerard dela Cerna tallied 22 points to spearhead the Lemurs attack while Albien Cadungog put up 16 markers.

In the other do-or-die games in the Evo League, the Author Solutons Philippines Inc. Hardbacks and the Kyocera Frontiers booked a semis showdown after they defeated their opponents in the quarterfinals.

The Hardbacks edged the Tech Mahindra Mighties, 49-46, behind the stellar performance of Syv Millevo, who had 28 points, five boards and five steals to help tow the team to the best-of-three semis against the unbeaten Dreamscape Lions.

The Frontiers, on the other hand, slipped past the JP Morgan & Chase Bankers, 61-56.

Matthew Grafilo was the man of the hour for Kyocera as he piled up 30 points, 10 rebounds and five steals. Ariel Edera also backed him up with 13 markers, six rebounds, four assists and five steals.

In the Elite Classic, the three-time defending champions Converters moved on to the Final Four after they laid waste to the Fusion Dragons, 72-52.

Bernard Mongcupa came out of nowhere and led his team to the convincing win with his 18 points, six rebounds, three assists and five steals.

The Converters will now take on the top-seeded Accenture Sharks in the semis. The other Final Four match-up will pit the Teleperformance Vipers against the Sykes Pioneers.