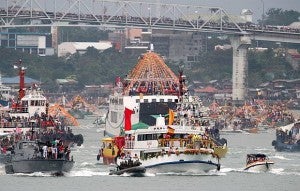 A flower-decked ‘galleon’ brings images of the Sto. Niño and Our Lady of Guadalupe down the Mactan Channel for the annual fluvial procession participated by 130 motor bancas and boats. (CDN PHOTO/TONEE DESPOJO)

For the first time,  the sea  procession of the Sto. Niño de Cebu scheduled on January 19, 2019  will start at the Muelle Osmeña in Lapu-Lapu City.

Located just behind the National Shrine of Nuestra Señora Virgen de la Regla, the Muelle Osmeña was considered by organizers as the best location to kick off the annual sea procession of the child Jesus because “it’s the closest sea port from the church,” said Fr. Ric Anthony Reyes, OSA, spokesperson of the  Basilica Minore del Sto. Niño.

The fluvial procession will start at 6 a.m.

For the second year, the images of the Sto. Niño and the Our Lady of Guadalupe will drop by the Nuestra Señora de Regla National Shrine in Lapu-Lapu City shortly before the start of the fluvial procession.

The Augustinian fathers of the Basilica Minore del Sto. Niño earlier decided to extend the annual traslacion from Mandaue City to the adjacent island of Mactan, particularly in Lapu-Lapu City, in response to numerous requests from Oponganons who want to be visited by the images during the festivities.

As in previous years, the traslacion or ritual transfer of the images of the Sto. Niño and the Our Lady of Guadalupe will start after the 5:30 a.m. Mass on January 18, Friday, from the basilica to the National Shrine of St. Joseph in Mandaue City.

At 2 a.m. on Saturday, January 19, a send off Mass will be celebrated at the National Shrine of St. Joseph. But unlike in previous years, there will be no more foot procession that will bring the images of the Sto. Niño and the Our Lady of Guadalupe to the Ouano Wharf in Barangay Looc, Mandaue City.

Instead, the images will be transported in a motorcade to the Nuestra Señora de Regla National Shrine in Lapu-Lapu City for a 4 a.m. Mass.

Afterwhich, the images will be brought to the Muelle Osmeña for the start of the fluvial procession along the Mactan Channel./dcb