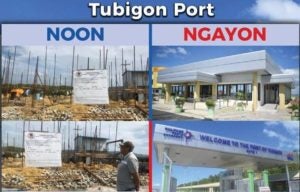 Cebu City, Philippines – More vessels can now dock at the Tubigon Port following the completion of the port’s expansion project.

The Department of Transportation, in its Facebook post, said the port can now accommodate up to 28 ships daily, nearly thrice the previous capacity of 10 ships.

“The port can now harbor larger vessels, as well, and has three Ro-Ro (roll on roll off) berths that can hold landing craft tanks (LCTs) and barges,” according to DOTr. The DOTr reopened the Tubigon Port last Saturday.

In addition, the port has an air-conditioned passenger terminal building with a baggage X-ray machine and walk-thru metal detector. The terminal can now accommodate 4,000 passengers daily, more than twice the previous capacity of 1,500.

The Tubigon port was among those that sustained damages during the magnitude 7.2 earthquake that hit Bohol in 2013.

Upon seeing Tubigon Port in disrepair during an inspection in March 2018, DOTr Secretary Arthur Tugade immediately instructed to fast-track the repair of the port.

The rehabilitation project also includes the establishment of a one-stop shop for a more convenient clearing and payment of port charges; the repair of the pedestrian covered walkway, lighting system, security fence and gate; and improvements on the port access road.