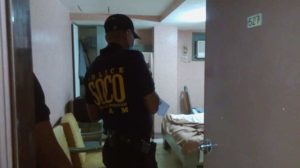 A member of the Scene of the Crime Operatives checks the hotel room in downtown Cebu City where two persons were found dead. CDN photo/Benjie Talisic

Cebu City, Philippines – A man and a woman were found dead with gunshot wounds to the head in a downtown hotel here late Monday night, January 7, 2019.

According to Senior Inspector Joemar Pomarejos, commander of Station 3 of the Waterfront Police, initial investigation showed there was no foul play in the death of the two.

Police said that based on their investigation, the two checked in in the hotel on Saturday, January 5, and were supposed to check out on Monday noon.

According to Pomarejos, the front desk of the hotel on Monday noon called through telephone the room rented by the victims to ask if they wanted to extend their stay.

After several calls went unanswered, the front dest asked the hotel’s room boy on duty to check the room.

Still getting no answer from the occupants after several knocks on the door, the room boy decided to open the room using the master key and it was then that both victims were found dead lying on the bed.

The hotel reported the incident to the police at around 9 p.m. The police arrived at the crime scene shortly after.

Recovered inside the room was a Glock 9 mm pistol.

The police said it will further investigate the incident. /bjo