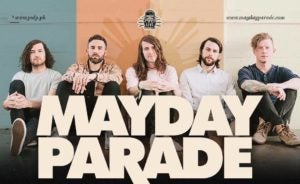 Cebu City, Philippines – American pop-rock band Mayday Parade announced its 2019 Philippine Tour, which includes stops in Cebu on May 3 and Manila on May 5.

The concerts will happen at the Sky Hall Seaside Cebu and New Frontier Theater in Manila.

The band is known for their songs Miserable At Best, Jamie All Over, One Of Them Will Destroy The Other, Oh Well, Oh Well, and Hollow.

Mayday Parade was formed in late 2005 as a merger of two local bands — Kid Named Chicago and Defining Moment.

The group released their debut EP (extended play record) on June 2006, which included the songs “When I Get Home, You’re So Dead” and “Three Cheers for Five Year” which they wrote together. /bjo