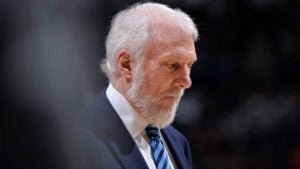 Popovich didn’t seem too happy early on against the Pistons. The Spurs called a timeout with 6:19 left in the first quarter, down 17-9. After a turnover led to a dunk by Detroit’s Andre Drummond, Popovich took another timeout, 14 seconds after the first one.

San Antonio appeared to get the message. A 23-2 run spanning parts of the first and second quarters put the Spurs up 45-33.

It was relatively smooth sailing from there for San Antonio, which led 59-51 at halftime and 84-73 after three quarters.

San Antonio was without forward Rudy Gay, out with a sprained left wrist, but the Spurs still won a season-high fifth straight game. Detroit has lost seven of nine.

It was the 518th road victory for Popovich, breaking a tie with Nelson for second on that career list. He’s now two behind leader Pat Riley.