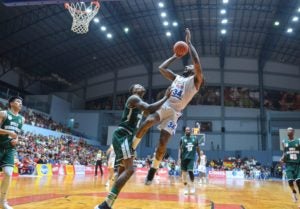 Renaldo Balkman and the rest of the Alab PIlipinas lost to the Malaysia Dragons on Wednesday night. Contributed/Ron Tolin

Cebu City, Philippines – The San Miguel Alab Pilipinas could not conjure the magical touch from their last game as they got upset by the Westports Malaysia Dragons, 72-71, on Wednesday night at the Maba Stadium in Kuala Lumpur.

The loss was the defending champion’s very first in this tournament, dropping them to 5-1 (win-loss), but still in first place.

It was a see-saw battle that saw Alab Pilipinas come away with a 56-51 lead at the end of the third. But the home side grabbed the upper hand, 70-67, after a three-pointer by Jonathan Wong and a long two by Shee Fai Loh, time down to 2:20.

Alab Pilipinas’ world imports Renaldo Balkman and PJ Ramos responded with buckets to give the Philippines back the lead, 71-70, with 44 ticks remaining.

However, the Dragons had the last laugh as Wong came up with a layup with 30 seconds left that shoved Malaysia in front for good.

Alab Pilipinas had an opportunity to grab the lead and steal the win but point guard Ethan Alvano threw an errant pass that doomed the Philippines on their final possession.

Balkman led Alab Pilipinas with 31 points and 14 rebounds while Ramos had 16 markers and 11 boards to go with five assists. Alab Pilipinas’ local players however, failed to offer any support as the ABL’s local MVP Bobby Ray Parks had just five while Alvano and sparkplug Josh Urbiztondo, who combined for 40 points in their 105-95 win over the Zhuhai Wolf Warriors last weekend here in Cebu, managed a combined two points.

Alab Pilipinas’ three-point marksmanship also deserted them during Wednesday’s game as they went 6-of-28 a few days after making 16 trifectas.