Pinamungahan athlete a step closer to another Palaro stint 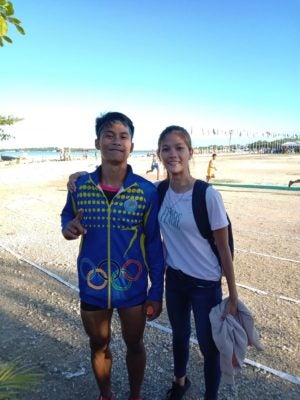 Carmen, Cebu – Oliver Aliganga has trained hard all-year long because he wants to compete again in the Palarong Pambansa.

The 16-year-old trackster took a step closer towards that goal after bagging a gold medal in the boys’ secondary long jump competition in the Cebu Provincial Sports Meet on January 7 in the northern Cebu town of Carmen.

Aliganga’s jump of 6.4 meters gave him the gold that netted him a spot in the the Cebu Province team for the Central Visayas Regional Athletics Association (CVIRAA) meet in Dumaguete in February.

The win also gave the south western Cebu town of  Pinamungahan’s its first gold medal in the meet for the second straight year.

Aliganga started competing in athletics when he was 11 years old and has since dreamed of clinching a gold medal in the provincial meet.

Last year, he finally achieved that dream, which opened a lot of opportunities for him as he not only represented Cebu Province to the CVIRAA Meet but also Central Visayas in the Palarong Pambansa held in Vigan City.

Helping him achieve that dream was Ezel Conde, the female runner who made the headlines because of an  accident in the National Milo Marathon Cebu leg last year.

Like Aliganga, Conde also studied at the Lamac National High School, where she was a track and field athlete.

After graduating from her culinary school last November, Conde returned to the school to volunteer as a coach for the Lamac athletes so they can compete in the municipal meet and get to represent Pinamungahan in the provincial meet.

Aside from the Palaro, Aliganga also hopes to get a varsity scholarship since he wants to finish with a degree in Criminology.

This is one of Aliganga’s goals in life as he would really want to help his family. Aliganga’s mother takes care of him and his siblings while his father is a construction worker.

With the way things are going, the promising athlete seems to be on the right track. /bjo

Read Next
Labangon buy-bust yields P500k worth of shabu