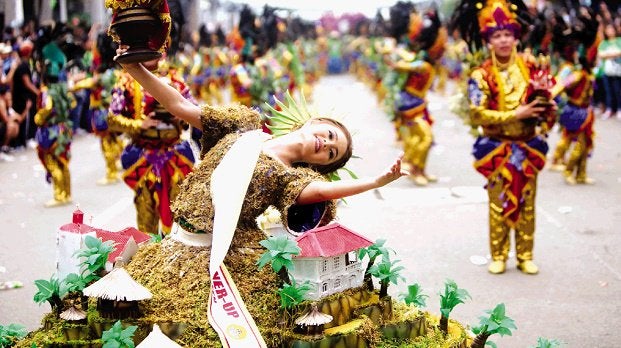 CEBU CITY, Philippines – Performers from the Municipality of Daanbantayan in northern Cebu will again be joining this year’s Sinulog grand parade to defend their Free Interpretation (FI) championship title.

But more than that, choreographer Mark Barry Luche said that their performance this year would also be in support of the desire of some props men, who are drug surrenderers, to come to Cebu and offer thanksgiving to the Señor Sto. Niño.

Tribu Kandaya consists of students and out of school youth coming from the town’s 20 barangays.

Luche said that while he agreed to the request of the still undetermined number of drug surrenders in their group to join their contingent, he was well aware that what he was doing was a big risk.

The delegation from Tribu Kandaya consisting of at least 600 individuals will be arriving in Cebu City late night of January 14 and will be staying at the Cebu City Central School.

Their group is made up of 90 performers, 50 instrumentalists, 250 props men and around 200 kitchen and security personnel and medics.

Luche said that with barely two weeks left before the grand parade, they still continued to raise funds to take care of their P4.5 million budget requirement.

The municipal government of Daanbantayan allocated P3 million for their SInulog needs while they would have to raise from donations the remaining P1.5 million balance.

He said that they would have “Halad Pasalamat” as the theme for this year’s FI performance.

Their production will tell the story of Daanbantayan native who got sick and remained unwell even after his visit to a quack doctor.

Even witchcraft was not enough to restore his good health, until his family decided to bring him to Cebu City to pray to the Sto. Niño for his healing.

Luche said the Daanbantayan performers would continue to use the tribal costumes that they had been known for but with a touch of festival and sarimanok colors.

But should they win again, Luche said that would already be a bonus for their group.

Tribu Kandaya first joined the Sinulog in 1996 and won second place in the FI category. The next year, they won the championship trophy in the same category.  They won another championship in 2007 before they decided to take a rest from the annual competition.

When they joined again in 2012, they took home the 4th place trophy in the FI.

Luche said that after their 2012 performance, they decided to again take a break from the competition and made a comeback in 2018 where they bagged the championship trophy./dbs