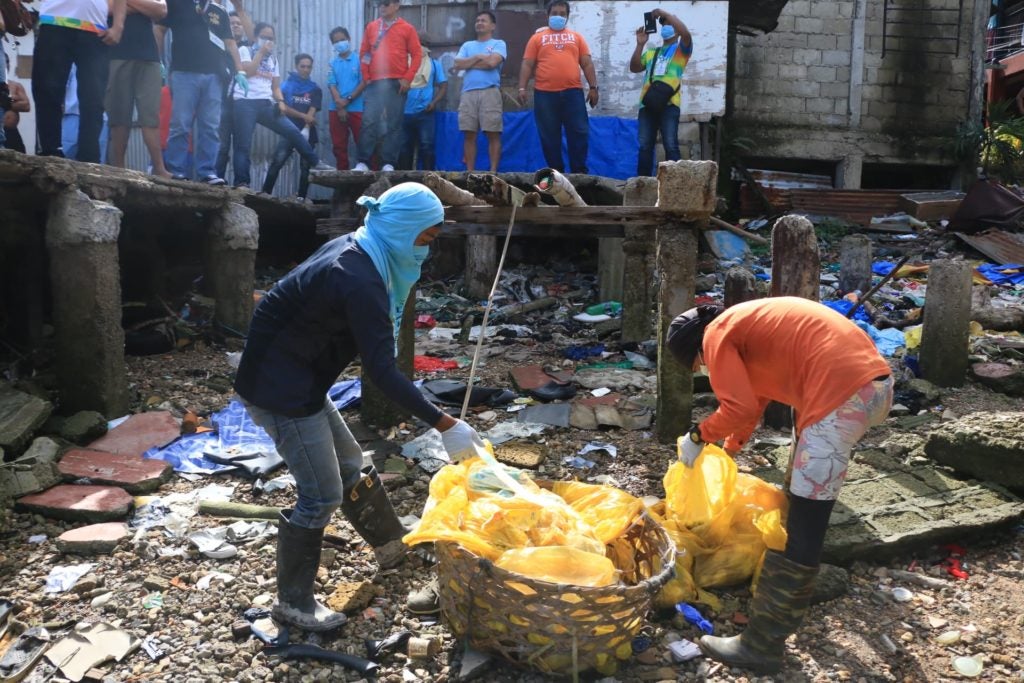 Officers from Lapu-Lapu’s City Environment and Natural Resources Office ( CENRO) continue to collect more hospital wastes from the Mactan Channel. The presence of the hazardous waste has affected the livelihood of the island’s fishermen. / photo courtesy of Lapu-Lapu City PIO

CEBU CITY, Philippines—Like many coastal villages in the country, residents of Barangay Ibo in Lapu-Lapu City rely on the bounty of the sea for their sustenance.

Fishing and collecting shells are their primary means of livelihood.

But since the discovery of hospital wastes floating on the seas of their barangay, some of the residents have temporarily stopped catching fish and collecting shells.

Eddie Ponce usually spends his free time fishing. He would use his catch as the family’s viand and would sell his extra harvest for additional income.

However, Ponce had stopped going to the sea since the day he found a yellow garbage bag containing blood residue and other wastes stuck under his boat.

The 31-year-old Mactan Export Processing Zone (MEPZ) employee has been fishing in the Mactan Channel for 12 years now.

He said before, fishermen from Barangays Opao and Umapad in Mandaue City would come to fish in the seas of Barangay Ibo.

But today, when CDN Digital visited the barangay, all the fishermen’s boats were docked. A lone fisherman was seen collecting seashells.

Ponce’s neighbor, Samson Bulante has also stopped fishing and collecting shells and crabs for the first time in more than 40 years.

Being born and raised in Barangay Ibo, Bulante said this is the first time wastes from hospitals ended up in their shores.

Since January 5, wastes from hospitals based in Mandaue City were found floating on the seas of Barangays Ibo, Poblacion, Pusok and Pajo in Lapu-Lapu City.

And since then, authorities have collected sacks of medical trash some containing tubes with infectious specimen, syringes, medical gloves and blood samples.

The Environmental Management Bureau in Central Visayas (EMB -7) has already recommended fining the service provider tasked to dispose of the trash P250,000 and P110,000 for its hospital client. /rcg