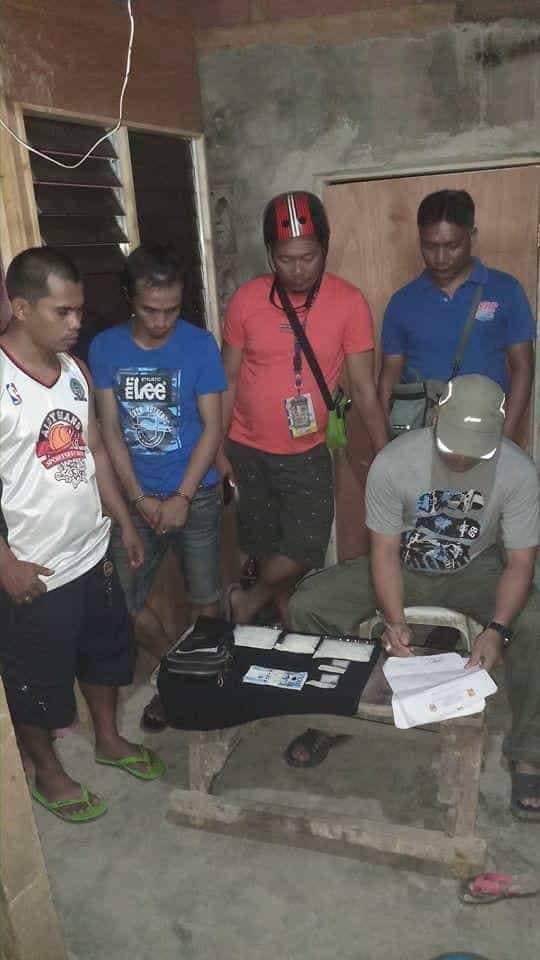 Suspected high value drug personality Elvie Peter Mandreza (second from left and in handcuffs) looks on as an operative of the Pardo Police Station records the amount of suspected shabu seized from him following a drug bust at his residence in Barangay Basak Pardo at dawn of Sunday, Jan. 13, 2019. / Photo courtesy of the Cebu City Police Office (CCPO)

CEBU CITY, Philippines — A high-value drug personality posing as a fish vendor in  Carbon Market  was caught in a buy bust operation hiding P2.1 million worth of drugs in his home in Barangay Basak Pardo, Cebu City.

Elvie Peter Mandreza, a newly identified alleged drug personality, was caught with the large stash of shabu (crystal meth)  in an operation staged at dawn today, January 13,  according to Chief Inspector Regino Maramag, the chief of the Pardo Police Station that conducted the bust.

Maramag said the Pardo police placed Mandreza under surveillance for two weeks prior to his arrest.

Mandreza allegedly posed as a fish vendor in Carbon Market, Cebu City’s premier public market spread in an over-a- hectare area,  in order to build connections for his illicit trade.

The suspect has just risen from the ranks in Cebu City’s drug trade and was  starting to be known as the drug pusher to go to in Barangay Mambaling, according to Maramag.

While Mandreza is a resident of Basak Pardo, his base of operation was the adjoining barangay of Mambaling, Maramag said.

Maramag said that Mandreza could be a trusted personality in a drug group or syndicate and may hold information about the syndicate.

“We are going to interrogate him regarding his involvement in the bigger drug group. We are hoping to gather information that may eventually lead us to the higher value targets,” said Maramag.

Confiscated from Mandreza’s possession were two small packs and three large packs of suspected shabu with a total value of P2.108 million.

Mandreza is currently detained at the Pardo Police Station pending the filing of charges against him./ elb