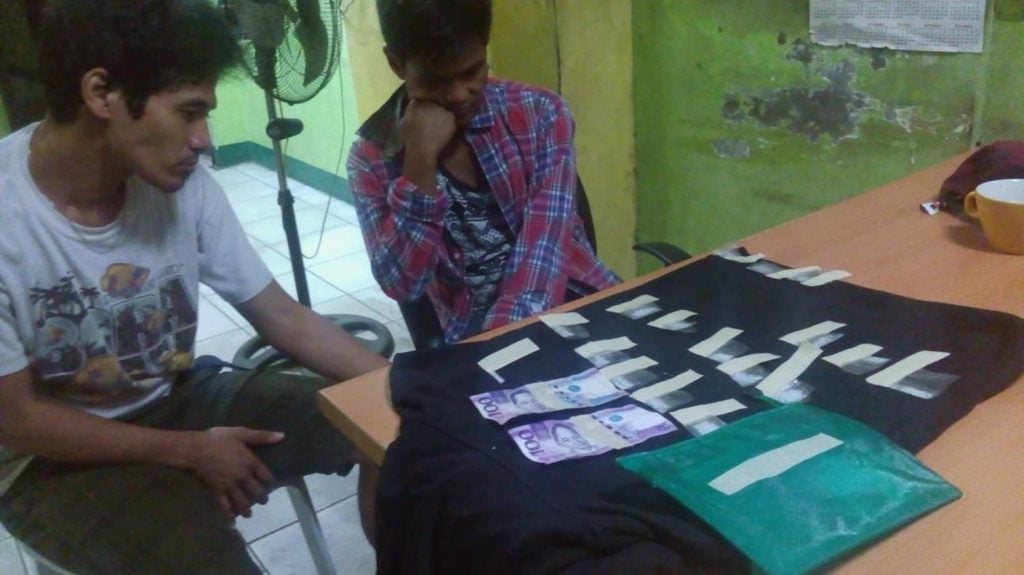 John Paul Sentillas and Benjan Uy are brought to the Cebu City Police Office where they were processed for detention. Photo by Benjie Talisic

CEBU CITY, Philippines — Instead of having a successful career in law enforcement, a Criminology graduate decided to focus on an easier, risky career on the other side of the fence: Selling illegal drugs.

At 3 a.m. today, January 14, the drug peddling days of John Paul Sentillas, 32, came to an end after he was caught with at least P100,000 worth of suspected shabu in a buy-bust operation in Barangay Kamputhaw, Cebu City.

Barandog said that the illegal drugs taken from Sentillas had an estimated Dangerous Drugs Board value of P102,000.

He said that they learned about Sentillas’ illegal drug activities from residents, who reported these to “Itug-an ni CD” Facebook page.

The netizens, who reported Sentillas and his illegal activities at the FB page, described Sentillas as one who had been arrested several times but he still would be released from jail.

Barandog said that they checked on this and found out that Sentillas was indeed arrested several times, but he was just arrested then for possession of illegal drugs.

This time around he was caught selling illegal drugs.

Barandog said that they monitored Sentillas and verified the report of his alleged illegal activities.

After they confirmed Sentillas’ illegal drug activities, they then conducted the anti-illegal drugs operation against the suspect.

He was handcuffed after the drug buy was done by an undercover police officer.

Sentillas was detained at the CCPO detention cell pending the filing of illegal drug possession and illegal drug selling charges.

When interviewed by CDN Digital at the detention cell, Sentillas said he did not have a job despite him being a Criminology graduate.

He, however, did not answer when asked if the illegal drugs were really taken from him and where did he get those drugs.

Meanwhile, during the operation against Sentillas, Barandog said that they also arrested Benjan Uy, who was caught with sachets of suspected shabu.

Uy, 30, of Barangay Kamputhaw was also detained at the CCPO detention cell pending the filing of charges./dbs