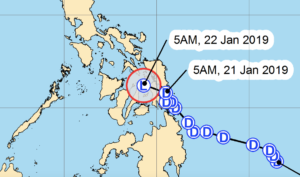 As a result, the Philippine Atmospheric Geophysical and Astronomical Services Administration (Pagasa), in a severe weather bulletin they issued at 11 a.m. on Monday, lifted Storm Signal No. 1 over Northern Cebu, Southern Leyte, Bohol, Surigao del Norte and Dinagat Islands.

The provinces of Sorsogon, Masbate including Ticao Island, Northern Samar, Eastern Samar, Samar, Biliran and Leyte, however, are still covered by the storm signal.

Jet Rey Osorio, weather specialist from Pagasa-Mactan, said with Amang likely to weaken into a LPA, chances are that tomorrow’s weather will see more sun.

But in the meantime that Amang is still within the vicinity of Leyte and Samar provinces, Osorio also said Cebu may still experience light to moderate rains today. bjo

Read Next
Sinulog Festival Queen 2018 confident that successor can deliver