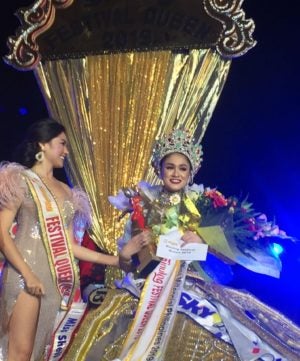 The 22-year-old Rebortera, who spoke to Cebu Daily News Digital last weekend, advised Borromeo to start preparing for two upcoming pageants where she will be representing Cebu.

“I know she can make it. She can handle both career and studies. I did it. She can do it [too],” Rebortera said.

As the newly crowned Sinulog Festival Queen 2019, Borromeo, who is 18 years old, is expected to join Reyna ng Aliwan 2019 and the Miss Millennial Philippines 2019.

The Aliwan Fiesta is known for the gathering of different cultural festivals in the country held in Pasay City every summer.

Rebortera is also happy that Cebu does not need to look for its representative in Miss Millennial Philippines 2019.

Rebortera is the first Cebuana who won the crown. She is also the second Cebuana who joined the Miss Millennial Philippines after Sarah Madrigal from Lapu-Lapu City, who made it to Top 10 in 2017.

After a successful reign, Rebortera said she will focus on her studies as she wants to graduate this April.

Rebortera is taking up Bachelor of Science in Dentistry at the Cebu Doctors’ University (CDU). bjo