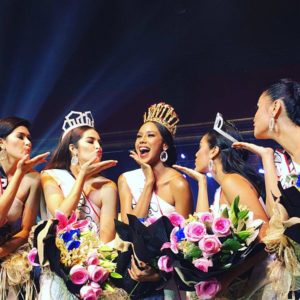 Cebu City, Philippines – Binibining Cebu 2017 Apriel Smith is spending 2019 participating in at least two regional pageants after announcing that she will not be joining Binibining Pilipinas this year.

Smith was recently crowned this month as Miss Isabel 2019 in Isabel, Leyte, and is set to compete for Miss Zamboanga 2019.

Smith earlier revealed to CDN Digital that she will not be joining Binibining Pilipinas 2019 to focus on further improving herself before she goes back to compete in the national arena.

Smith said she appreciates all her supporters and “those who believe in me.”

“I am so blessed to have each of you. I know all of you want to see me back on

the Bb. Pilipinas stage. But to make it official, I am not joining BBP 2019,” she wrote.

Smith said her decision to not compete this year is not anything to be sad about because she is preparing for her comeback.

“I know you’re all with me on that but soon I will hmmm maybe 2020? Hehehe. I promise to keep everyone posted,” wrote Smith.

Smith joined Binibining Pilipinas in 2016 and advanced as one of the Top 15 semi-finalists.

The same year, another Cebuana, Maria Gigante, also competed in the national pageant.

Smith and Gigante’s Binibining Cebbu 2017 batchmate, Samantha Ashley Lo, who won the Binibining Cebu Tourism crown, confirmed that she will join the national pageant this year.

Based on history, search announcement usually happens in January while the coronation night happens in March. /bjo