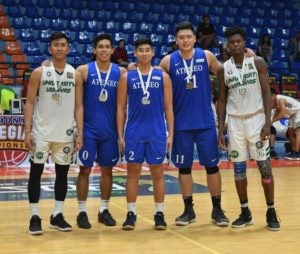 Cesafi MVP Rey Suerte (left most) and Bassieru Sackor (right most) of UV were selected to the Mythical Five. With them are (from left) Ateneo’s Thirdy Ravena, BJ Andrade, and MVP Isaac Go. | photo from PCCL Facebook page

Cebu City, Philippines – The University of the Visayas Green Lancers’ head coach Gary Cortes rued his team’s lack of urgency and fire in their 71-95 loss to the reigning UAAP champions, Ateneo de Manila University Blue Eagles in the one-game finals of the 2018 National Collegiate Championship Presidents Cup on Monday, January 28, at the Filoil Flying V Center.

“Kulang ang intensity,” Cortes said via text message when asked for his opinion on the lopsided game. (We lacked intensity.)

The Green Lancers were within striking distance in the second canto but suddenly went limp, allowing the Blue Eagles to go on a 16-5 run to close the first half ahead by 18, 52-34.

The second half was an all Ateneo show as the lead grew to a whopping 30 points, 75-45, at the end of the third.

Cortes’ disappointment in his wards was so apparent that he gave them a grade of “five out of 10” in that game.

Despite the loss, Cortes stuck to the positives and said that the match would serve each of the players and the team well as they go back to Cebu and prepare for the next Cesafi season later this year.