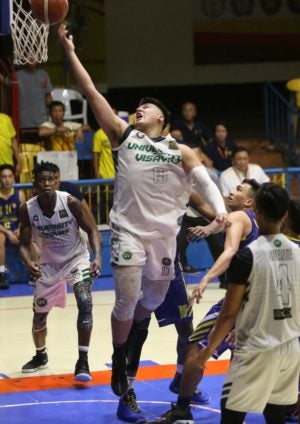 Cebu City, Philippines – Although the loss was a bitter pill to swallow as it cost them a chance of becoming national champions, a couple of standouts from the University of the Visayas (UV) Green Lancers will be bringing with them a lot of valuable lessons as they start their preparation for the upcoming season of the Cesafi basketball tournament later this year.

UV lost in the Philippine Collegiate Champions League finals to the UAAP rulers, Ateneo de Manila University, 71-95, in a game that was dominated by the Blue Eagles from start to finish on Monday, January 29, 2019.

As tough as the loss was, especially with the stakes so high, UV point guard Sheldon Gahi said the game was a good wake-up call for all of them.

“We learned a lot of things. First, we realized just how far we have to go to compete with a team like Ateneo. For me, as a point guard, I really need to develop my outside shot especially when you go up against teams that really have legitimate big men,” said Gahi, who played in his very first game since breaking his foot last year.

“When we get back to Cebu, we’ll start preparing for Season 19 especially with Rey (Suerte) and Josue (Segumpan) no longer with the team. It’s all on us now so we have to work twice as hard,” the spitfire guard added.

UV forward Jancork Cabahug, meanwhile, relished the opportunity to compete against such high-profile players like UAAP Finals MVP Thirdy Ravena and seeing up close just what they can do.

“It was a very tough game going up against big guys like Isaac Go and (Thirdy) Ravena.  They’re tough, tall and can hit from the outside,” said the pride of Mandaue City.

It may have been just one game but Cabahug said there was a lot of meat to be taken from that bone.

“I learned a lot from that game especially with regards to timing on offense and defense. We just have to be more aggressive. I also realized just how much I need to improve my skills, agility and strength,” added the man known as the “Bulldozer.” /bjo