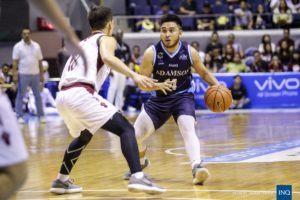 He made the announcement through social media on Wednesday afternoon, January 30, 2019.

When asked what his reasons were, the 24-year old relayed he needs to focus on his studies, especially when he is so close to getting a degree in Business Marketing.

“Mahirap kapag walang diploma,” said Pingoy via a chat with this writer through messenger.

Pingoy averaged just 3.3 points, 1.8 rebounds and 2.3 assists per game in limited minutes but was still a key cog in Adamson’s run to the Final Four, where they fell to the University of the Philippines Fighting Maroons, in spite having a twice-to-beat advantage.

Although basketball remains a huge part of his life, Pingoy explained that he wants to do this in order to fulfill a promise he made to his parents.

In his post, he thanked those that supported him through his journey.

“To Ateneo de Manila University, it has been a journey being part of the Blue Eagle basketball team. I can’t thank Ateneo enough for giving me the chance to play and show I still have it,” read Pingoy’s message.

He also thanked Adamson University for giving him “a second home.”

“To Adamson University, thank you for being with me for a short period of time. You never knew how grateful I am to be once called a Soaring Falcon. I fell short but this is not the end. Thank you for giving me a second home.” /bjo