This was revealed by her brother, Sean Ramos, on a Facebook post showing sneak peaks of Justine’s room.

The post was captioned, “All the hard work and sleepless nights had paid off! This is my sister’s room. Top 1 in 2019 Architecture Licensure Examination.” 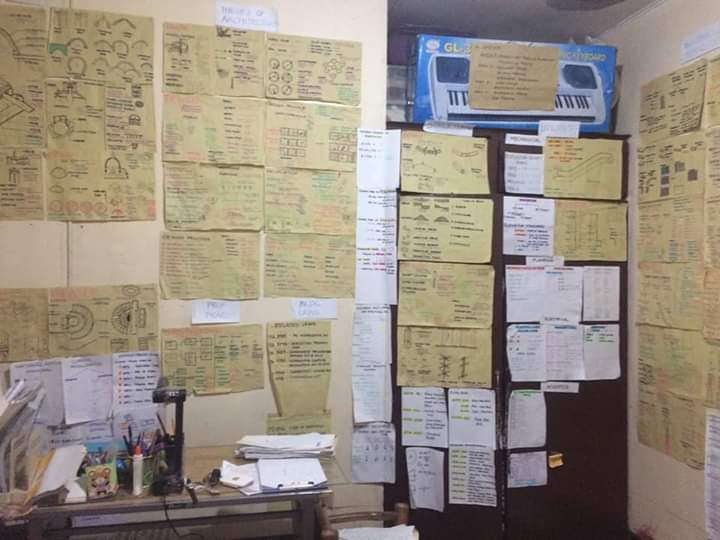 Viral photo of the room of Justine Lei Germino Ramos, the Cebuana who topped the recent Architecture licensure examinations, gained more than 50,000 engagements on Facebook as posted by ver brother, Sean. | Photo credits to Sean Ramos

Justine’s room was covered from floor to ceiling with review notes and drawings, which prepared her for the licensure examinations that was held on January 25 to 27, 2019.

Sean told Cebu Daily News Digital that the method worked as his sister bested more than 1200 other passers of the licensure exams.

The 27-year-old graphic designer cannot contain his pride for his sister whom he shares the love for design.

“I just wanted to show the public how my sister studied for the exams. She makes me very proud,” he said.

Sean said that he watched his sister study 14 hours a day at the Cebu City Public Library, or Rizal Library to locals,  and go home to continue studying inside her review notes-covered room.

“She worked hard for this. She deserved this,” he said in Cebuano.

He said that he only wanted to share the study methods of Justine to inspire others.

Sean said he is happy and grateful to the people who spread positivity through his post.

“I hope you are all inspired by my sister’s hard work,” was Sean’s message to the netizens. /elb