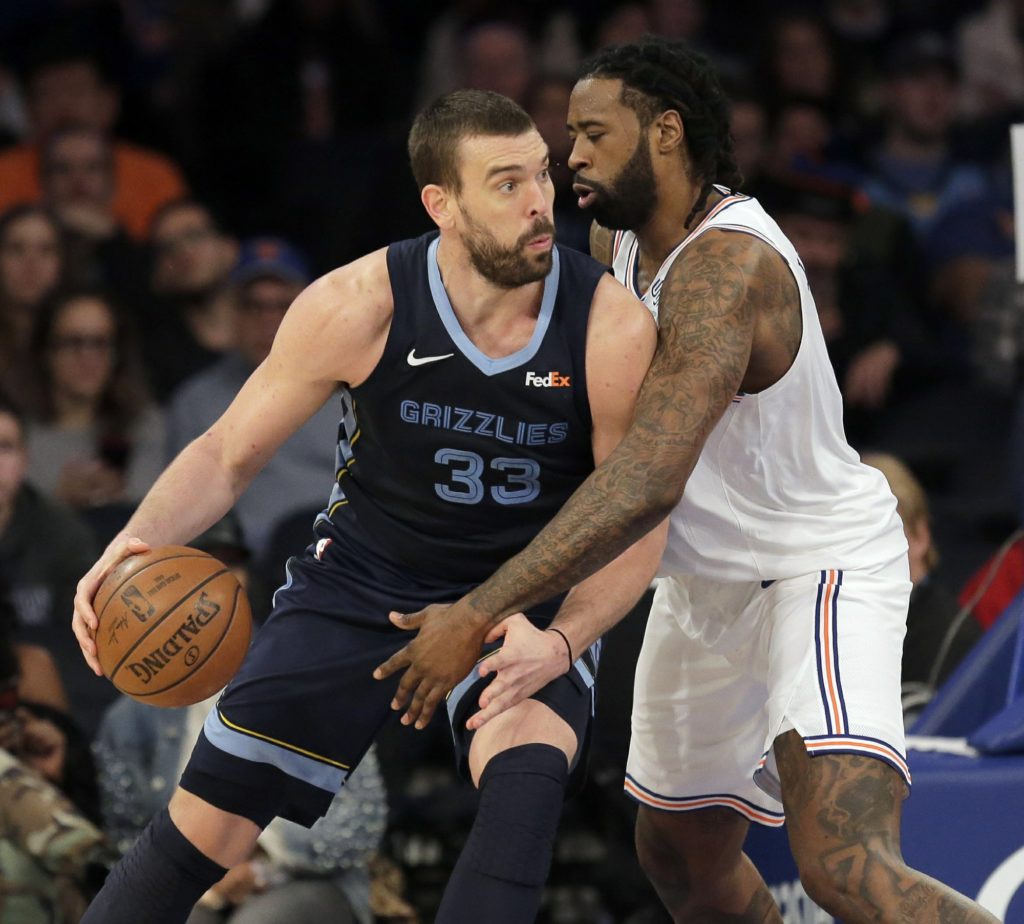 Memphis sent Gasol to the Raptors in exchange for Jonas Valanciunas. | AP photo

The Memphis Grizzlies have taken another big step toward rebuilding their roster, trading center Marc Gasol and leaving Mike Conley as the lone remaining piece from the core four of the franchise’s best success.

And Conley’s tenure might only last the rest of this season.

The Grizzlies traded Gasol to Toronto on Thursday at the NBA trade deadline, more than two weeks after owner Robert Pera told both Gasol and Conley that they would be listening to offers for two of the league’s longest-tenured teammates.

Memphis sent Gasol to the Raptors in exchange for Jonas Valanciunas, a person told The Associated Press on condition of anonymity because the details couldn’t be announced until approved by the NBA. ESPN, which first reported the Gasol deal, also said CJ Miles and Delon Wright were included in the deal with Valanciunas.

Trading Gasol at least got Memphis something out of a 34-year-old center who holds a $25 million option he can exercise this summer.

Conley had been linked to Utah, Detroit and even Toronto along with Gasol in a handful of reports. But Conley is due $67 million over the final two seasons of the max contract he signed in July 2016, making a trade tougher to piece together.

Grizzlies coach J.B. Bickerstaff said he doesn’t expect all the trade rumors to be an issue with Conley.

“With him, just knowing his personality and who he is, I never got the sense that he didn’t want to be here,” Bickerstaff said. “Again, another guy that’s meant a ton to this organization. Memphis is home for him and his family, those types of things. He understands the nature of this business and how it can impact everyone from All-Star caliber players on down.”

Instead, the point guard whose 771 games played is a franchise-high — just ahead of Gasol’s 769 — prepared to play in Oklahoma City on Thursday night with a handful of new teammates joining him soon after other moves Thursday by the Grizzlies.

Memphis also sent Garrett Temple and JaMychal Green to the Clippers for guard Avery Bradley, and a person told the AP on condition of anonymity because details hadn’t been announced yet that Memphis swapped Shelvin Mack to Atlanta for Tyler Dorsey.

They tried to rebuild around Conley and Gasol, who had been among just six active NBA players to spend their entire NBA careers of at least 10 seasons with one franchise. They won just 22 games last season without Randolph and Allen, and Conley out most of the season with an injured heel.

The Grizzlies came into this season insisting they could be a playoff team.

Instead, they just matched the 22 wins from last season on Tuesday in a game Gasol left the arena early after being benched without explanation. Two days later, Memphis traded away its career leader in points, rebounds and blocks to at least get something in case Gasol opted out this summer.

Valanciunas had been expected to return to the court Thursday after missing 25 games with an injured thumb. Now the center gets to try to replace Gasol. Bickerstaff said no one will replace what Gasol meant to the Grizzlies, Memphis or the fans.

“Mike’s going to need some help,” Bickerstaff said. “So someone new is going to have to step up and maybe get out of their comfort zone a little bit and embrace that role. But there is no replacing what Marc has done here, and what he’s meant to this team.”

It’s just the latest off-court drama for a franchise involved in a failed three-team trade in December over confusion about which Brooks (MarShon or Dillon) was included in the deal. MarShon Brooks finally was traded away Jan. 3 along with Wayne Selden Jr. to Chicago. Then the Grizzlies announced Jan. 6 that Chandler Parsons would continue rehab in Los Angeles after reports both sides had agreed to a split.

Now Pera has to decide if he wants to rebuild around Conley and rookie Jaren Jackson Jr., or simply try to get a better offer this summer.

Read Next
NBA trade deadline: The winners, and the losers