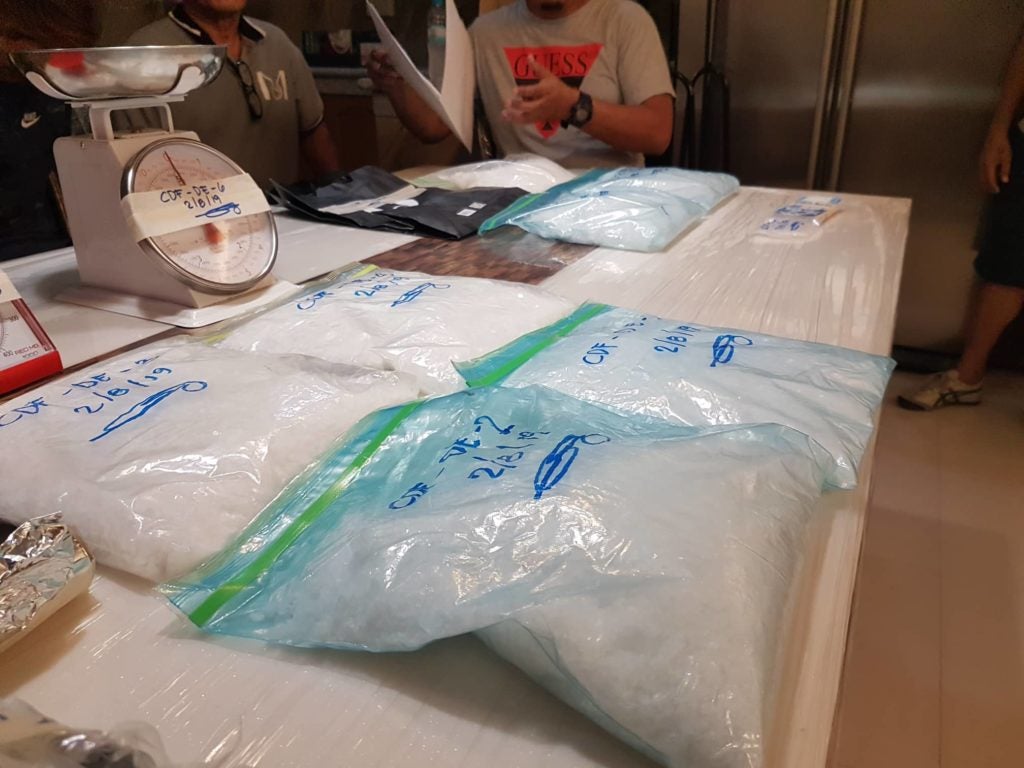 Large packs of suspected shabu are inspected and weighed by the police after they were confiscated in a high-end subdivision in Mandaue City during a raid in a house there at past 11 p.m. on Friday, February 8. | CDND Photo by Benjie Talisic

CEBU CITY, Philippines — Police are investigating if the P51-million worth of suspected drugs confiscated from a posh subdivision in Mandaue City on Friday evening, February 8, had come from drug personalities based in Ozamiz City.

Chief Superintendent Debold Sinas, Police Regional Office in Central Visayas (PRO-7) director, said during a press briefing on Saturday, February 9, that they had learned that the suspect caught during the dawn raid, identified as Charlie Fortuna, allegedly had links to several drug personalities based in Ozamiz City.

Aside from that, Sinas said that Fortuna was originally from Ozamiz City, Misamis Occidental in Mindanao.

“Ni-ingon man gyud siya nga he is originally from Ozamiz. Naa iyahang friends didto. We suspected, and we have reasons to believe that the drugs came from Ozamiz, and not directly from Manila,” he added.

Sinas also said that the PRO-7 was coordinating with the Philippine Drug Enforcement Agency (PDEA) and the Philippine Coast Guard to widen their network of information with regard to this case, especially since it would be difficult to monitor Cebu’s ports.

“We’re coordinating with PDEA, and requesting the Philippine Coast Guard for their assistance. But lisod mag monitor sa piers as of now. That’s why we sometimes base our monitoring from the reports or information we receive,” said Sinas.

However, when asked if Fortuna had any connection with the Parojinogs of Ozamiz City,  Sinas said that they had not yet found any link of the suspect to the Parojinogs.

“We believe this group came from Ozamiz. Gi assess gyud namo ang mga nakalink niya sa Ozamiz City, and whether he is directly involved with them. On that (Parojinogs), wala pami makit-an (nga evidence),” he added.

The Parojinogs in Ozamiz City, Misamis Occidental were tagged by President Rodrigo Duterte as narco-politicians or elected officials who allegedly have links in the illegal drug trade.

A year later, Ozamiz City Mayor Reynaldo “Aldong” Parojinog Sr. and 11 others were killed by police serving arrest warrants on drug charges against the mayor.

Eleven others, including the mayor’s daughter, Vice Mayor Nova Echaves, 36, were arrested. /dbs