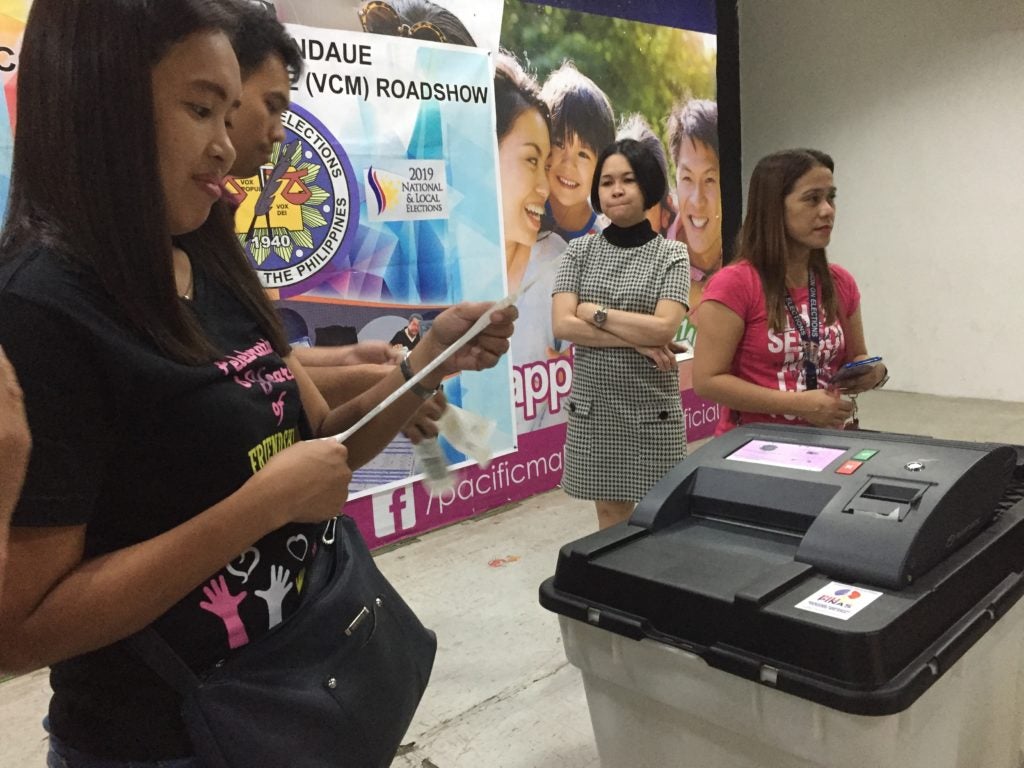 A voter checks her voting receipt after feeding the ballot to the Vote-Counting Machine (VCM) during a demonstration in Pacific Mall, Mandaue City on February 9. | Photo by Delta Dyrecka Letigio

MANDAUE CITY, Cebu, Philippines—With the midterm elections drawing near, the Commission on Elections in Central Visayas (Comelec-7) is in the midst of their preparations for the big day in May for voters.

Rafael Olaño, director of Comelec-7, said that the trainings for the teachers, who would serve as poll clerks and election canvassers, would start within the next few weeks and the identification of polling precincts had also began.

The poll body is also preparing voters for the upcoming elections with a Vote Counting Machine making the rounds in Cebu to help new voters be familiarized with the proper way to vote.

Lawyer Anna Fleur Gujilde, Mandaue City election officer, said that the VCM would be moving from one city to another starting in Mandaue for the Comelec officers to demonstrate to the public the process of voting.

The VCM was at the Pacific Mall in Mandaue City on Saturday, February 9, for the first demonstration in Cebu.

Gujilde said that that the people were hesitant at first to try the machine but with a ‘little’ push, people began to approach the VCM with the guidance of the Comelec personnel.

Gujilde explained how the voting process would happen which would start with the basic process of finding their polling precincts to the feeding of the ballots to the VCM.

She also told new voters to visit or call their local Comelec offices at least a week before election day so that they could identify their polling precinct, which had been divided into clusters.

She said this would make it easier for them to find their precincts on election day, which would be important because voting would only be limited from 6 a.m. to 5 p.m.

“The earlier we go to the precincts, the better,” Gujilde said.

The process of voting

Upon entry to the precincts, voters will receive a ballot, a marking pen, and a secrecy folder after the poll clerk has verified the voter’s identity.

She also reminds voters to carefully handle the ballot and avoid smudging, tearing, folding, or crumpling of the ballots as it may not be read by the VCM.

After shading carefully the circles beside the name of the voted candidate, the voter should approach the VCM where a poll clerk will assist  in the feeding of the ballot to the VCM.

The Comelec officer said that the voter should personally feed the ballot into the VCM.

A receipt will be printed which the poll clerk will fold and cut for the voter so upon checking, only the voter knows his/her vote.

Voters are obliged to check if the receipt reflects the correct votes. Afterwards, the voter will have to place the receipt in the Voter’s Receipt Receptacle.

Gujilde said that taking the voter’s receipt home would be a grave election offense that could get a violator jailed for one to six years.

Afterwards, the voter’s finger will be marked with indelible ink.

Two more schedules for Comelec demonstrations will be conducted at the Mandaue Sports Complex on February 11 and February 18 for the public to witness the demonstration and practice for themselves the process of voting.

For his part, Lawyer Michael Sarno, Cebu City election officer, reminded Cebu City residents to  also look out for these demonstrations since the VCMs would be moving to Cebu City soon after Mandaue.

Sarno said that he was hoping that the elections would yield the desired results of the voters and it would remain peaceful for the duration of election period.

He said he was also hoping for a bigger voters turnout this election and he also encouraged new voters to practice their rights of suffrage./dbs