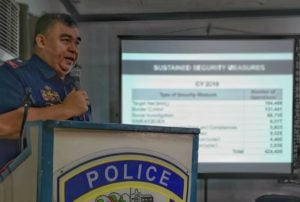 PRO-7 Director Chief Superintendent Debold Sinas reports about the peace and order in the region during the founding anniversary program of the Philippine National Police on Monday, February 11, 2019. CDN Digital photo | Tonee Despojo

CEBU CITY, Philippines—Police Regional Office in Central Visayas (PRO-7) Director Chief Superintendent Debold Sinas will propose to downgrade the classification of Mandaue City in the Election Watchlist Areas (EWAs) during their next coordination meeting with the provincial office of the Commission on Elections  (Comelec).

Mandaue City is presently classified in the orange category, or that having intense political rivalry and with the presence of armed men. This means more police will be deployed in the area during the May midterm elections.

“Mandaue City has just recently conducted their candidates’ forum and signing of the peace covenant. We can downgrade it and maybe we can re-categorize it to green since both major candidates have promised to observe the election laws,” Sinas said.

The police chief presented the update on the election preparation before Police Deputy Director General Archie Francisco Gamboa, who visited PRO-7 for the 28th founding anniversary program of the Philippine National Police (PNP).

Senior Superintendent Julian Entoma Jr., director of the Mandaue City Police Office (MCPO), said he is hopeful that the situation in the city come the May 2019 polls will be as peaceful as the previous national elections in 2016.