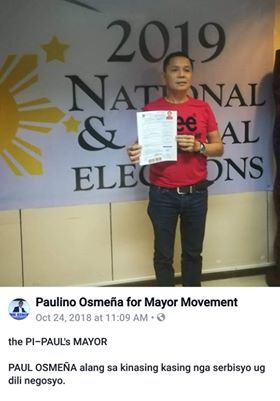 Paulino Osmeña, an independent candidate for mayor of Cebu City, has been delared a nuisance candidate by the Commission on Elections. The petition to strike him out of the list of candidates was filed by incumbent and reelectionist Mayor Tomas Osmeña. |Photo grabbed from Paulino Osmeña’s public Facebook page

CEBU CITY, Philippines — A candidate running for mayor in Cebu City bearing the family name of reelectionist Mayor Tomas Osmeña has been declared a nuisance candidate by the Commission on Elections (Comelec).

Paulino Osmeña, an independent candidate, was found to have “no intention, and means, like funds, to run (as mayor of Cebu City)” and was thus ordered striken out of the list of candidates for the city’s mayoral race, according to Lawyer Marchel Sarno, the election officer of Cebu City-North District.

The resolution regarding the candidacy of Paulino Osmeña, which was based on a complaint lodged by Mayor Osmeña, was penned by the Comelec Second Division and received last week by his office, Sarno told CDN Digital in an interview today, February 12.

However, Sarno said the name of Paulino Osmeña could still be reflected in the official ballot for the mayoral race this May since the certified list of candidates has been prepared before  the Comelec Second Dvision made the ruling.

“So, there’s a probability that his (Paulino) name will be printed on the ballot considering we already have a certified list of candidates. If that’s the case, then the votes he will receive will be considered as stray votes,” said Sarno.

There were  five individuals who filed their certificates of candidacy (COCs) in October last year to run for mayor of Cebu City in the midterm elections set this coming May.

Sarno said there is still a possibility that other candidates in the city’s mayoralty race will be considered as “nuisance,” and therefore disqualified.

“This (Comelec resolution against Paulino) may not be the last declaration of nuisance candidates in the city,” he said./elb

Read Next
Ex-wife of a Sabalones ‘hitman’ nabbed with drugs