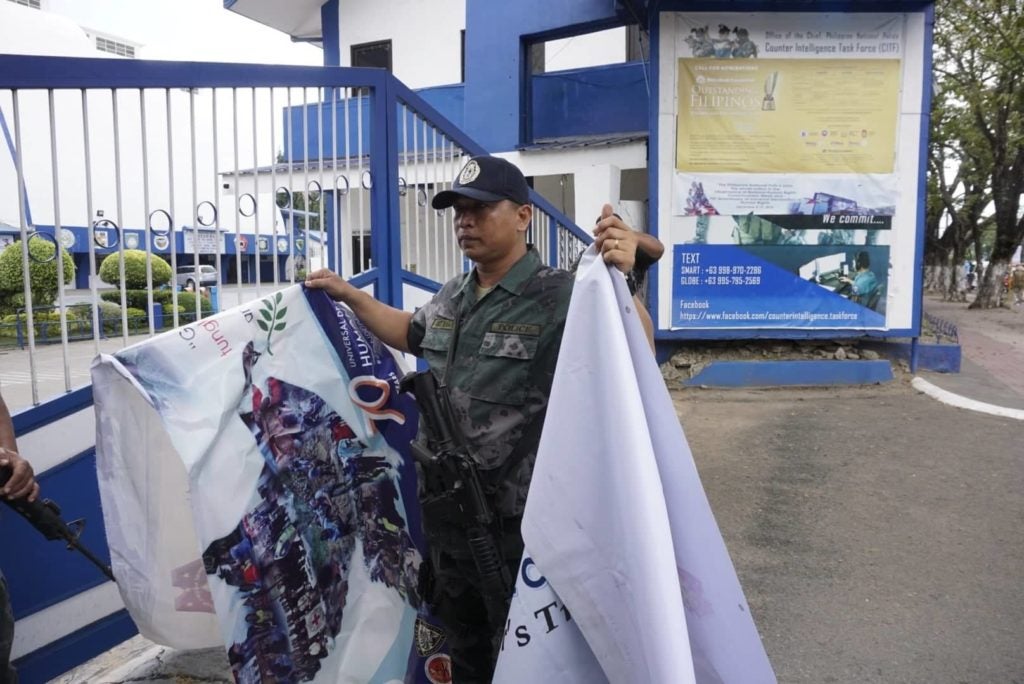 Police remove the tarpaulin which was partly torn after protesters tried to barge into Camp Sergio Osmeña’s gate on Monday, February 25. | Photo by Tonee Despojo

According to Senior Superintendent Oliver Lee, the chief of the Regional Chief Directorial Staff (RCDC), they would be filing cases of malicious mischief resulting to damage to public property against the militant groups involved in barging  towards the camp’s gate during the February 25 rally.

The groups tried to barge into the PRO-7 headquarters following the playing of loud music by PRO-7 to drown the protest of the protesters.

Read more: ‘Police have the right not to listen to protesters’

In a press statement, the militant groups said that the actions of PRO-7 was a direct threat to their freedom of speech on the very anniversary of the EDSA Revolution.

“Instead of listening to the cries of the people for justice and life, the Philippine National Police – PRO 7 chose to bully protesters and butcher freedom to express dissent and seek justice by playing loud disco music. BAYAN Central Visayas and KARAPATAN Central Visayas see this as a clear reflection of how they blatantly bastardize our freedom of expression!” said the militant groups.

Dr. Phoebe Sanchez, the chairperson of the Karapatan Central Visayas, said the way the police treated them was a disrespect to the freedom of speech that the Filipinos won during the EDSA Revolution.

“The PNP’s bullying acts earlier should be seen as an alarming symptom of more intensifying attacks of the Duterte regime against the opposition, activists and critic! Now, more than ever, we call on everyone not to cower in fear with PNP’s cheap tactics to silence the people’s voices,” the militant groups said in the press statement.

Senior Superintendent Remus Medina, Regional Intelligence Division (RID) chief, said that they would be looking at the closed circuit television (CCTV) of the camp to identify the people involved in the barging of the gate.

He said that protesters might practice their freedom of speech but they must also control themselves from being violent.