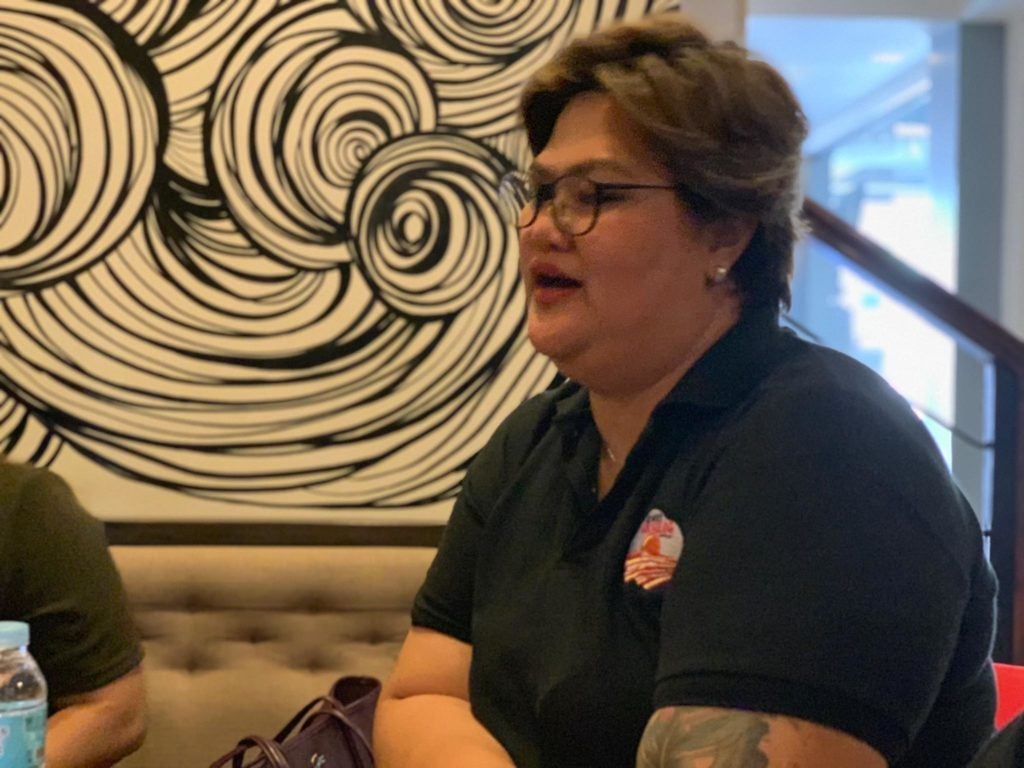 Cebu City, Philippines – Rica Peñalosa wanted to prove that one can go places even without going abroad.

So she worked hard to achieve this dream.

She knew it was going to be a tough ride but with her determination, the 46-year-old Peñalosa was able to accomplish this goal and now owns a success story that is worth sharing.

Peñalosa is now the owner of Baconnoisseur Corporation, the company behind the famous Ate Rica’s Bacsilog outlets.

So how did Peñalosa begin her journey?

Peñalosa used to be one of those end-of-contract employees who moved from one job to another.

Though an information and technology graduate, Peñalosa had a hard time getting a regular job, forcing her to work as a contractual staff in several banks in Manila.

By the time she reached her early 30s, Peñalosa decided that it was time to work overseas.

In 2006, while waiting for her work visa to Dubai, she put up a makeshift food cart at the back of the De La Salle University (DLSU) Taft Avenue campus, which happens to be near where she lived.

With only P20,000 capital borrowed from her father, the former office worker started selling rice meals to the students along Agno Street.

She not only braved the scorching heat but also the fitful police operation against sidewalk vendors.

The location made it a strategic place for a strip-made food stall for hungry students who are looking for a cheap grab during their breaks.

But what made her menu stand out was a simple yet innovative dish of Bacsilog, which comprised of rice, fried egg, and bacon topped with melted cheese.

The combination drew a lot of followers, mostly students. And what made them loyal customers was the price, P38 a cup.

“Tapsilog, is common na, and you can find it at every corner, But Bacon with egg, it was not something that many offered and mainly because they think it is expensive and I made it affordable for the student’s budget,” said Peñalosa.

With her income, she was able to manage to recover her initial capital within six months and decided to forego her plans of becoming an overseas worker.

While the money was good, it also meant working long hours.

“I opened at 7am, I would also close at 7pm,” said Peñalosa.

“When it rains, then there’s a strong chance that most of my goods will go unsold, worst case would be when the police will be coming for stalls and I didn’t have the permit,” she added.

Despite the challenges, she persisted.

Peñalosa was earning more than her monthly salary when she was a contractual employee, which was around P12,000 to P15,000.

Peñalosa also said that being her own boss was also empowering.

When a landowner along near Agno Street opened a food court and leased spaces, she managed to seal a spot.

After two years of playing cat-and-dog with police officers, Peñalosa opened her first stall complete with an official permit, and on 2008, her business finally had a name, Ate Rica’s Bacsilogan.

Being a formal business also means hiking her costs. She now has to pay rent and taxes, which is why  she was forced her to raise her prices. Her famous Silog now retails for P69 each.

Still, students came to buy. Actually, according to Peñalosa, her sale even grew as she sold around 500 to 600 rice cups a day.

This gave her the opportunity to expand her menu and introduced special meals that sell as much as P90.

With a growing loyal following, she accumulated enough savings to expand to another location.

In 2015 she opened a new stall inside a car park at the University of Santo Tomas (UST).

“Di ko ginusto na mag try sa ibang area because i wanted to focus sa La Salle dahil I was doing well, but when i saw the potential, I immediately grabbed it,” said Peñalosa.

It was until early 2017 when she decided to scale up the business.

After receiving inquiries for franchising, Peñalosa sought help from one of her loyal customers in DSLU to help her craft a franchising program.

Dino de Leon, who is now a lawyer, is a regular customer of Peñalosa when she was still a student.

Their friendship was enough to form a business partnership and De Leon did not hesitate to help a longtime friend.

“I was just asking legal question on how to craft a franchising program and then we became a business partners so we can make commercial decisions together,” she said.

They later formed a corporation called Baconnoisseur Corp., which will not only operate Ate Rica’s Bacsilog outlets, but also franchise it to other investors.

As present, Baconnoisseur Corp. has a total of 34 franchised outlets across the Philippines and is opening three new branches here in Cebu.

By keeping it below P500,000, the franchise package attracted even average employees.

“We also provide training for the handlers na,” Peñalosa said.

“We also tasked the franchisers to look for their own people, kasi it’s better that way; kilala mona kasi sila that and we work with trust here kaya by hiring your own people you can attest that you trust them na,” she added.

With the fast rising of Ate Rica’s Bacsilog, Peñalosa also said that they are aiming for 150 stalls by 2020.

Peñalosa, admitted she never thought her stall cart would last, let along become a franchised business.

“It was hard to do business, but i wanted to prove that I can go places even without going abroad,” she said. /bmjo

Read Next
Police trainee proposes to girlfriend during recognition rites in Consolacion, Cebu